In the Nov. 12, 2010, edition of the American Jewish World, I published the eulogy I wrote for my father. It was a new experience, losing a parent. Never did I imagine that just 11 weeks and three days after my father died I would lose my mother, too. What follows is based on the eulogy I delivered at my mother’s funeral Jan. 23 at Temple of Aaron Synagogue.

She was an extraordinarily gregarious, talkative woman; a spunky, memorable character, who was beloved by her family and friends.

My brother, Murray, lives in Palm Springs, Calif. At a family gathering the evening before the funeral, he commented that when our mom came to visit him, “from the dog park to a black-tie AIDS benefit, she made new friends.” 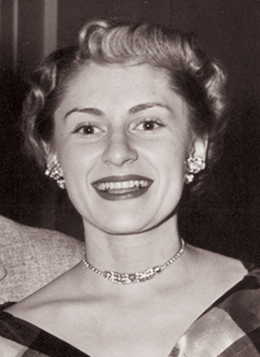 Anna Specktor at a party some years ago.

Truly from humble roots, as a young girl my mom lived in Waconia, Minn., where Grandpa Waller worked as a peddler and truck farmer. She occasionally commented about the anti-Semitic taunts she endured growing up in that rural area. When the family moved to the North Side of Minneapolis, she apparently found herself in a more congenial, more Jewish social milieu.

Our mom is survived by three siblings: Bruce Waller, of St. Louis Park, born 18 months after Mom; and her younger sisters, Betty Fantle, of St. Paul, and Lorrie Stelzer, of Los Angeles.

Betty also remarked on her sister’s sociable nature. She said, “She was so friendly and outgoing that she could make instant friends out of complete strangers.”

My dear aunt also recalled, “I don’t know what I could have done without her during the 12 years our beloved mother was [in the Sholom Home in St. Paul]. We would visit her every Sunday, and on the way home we would talk about how Mother used to be but no longer was, and we would have a bit of a cry together.”

Anna Waller graduated from North High School, where she was in the orchestra, belonged to Kadima, and served as a hostess in the lunchroom. Betty mentioned that Mom also took Yiddish lessons at the North Side Labor Lyceum, which was the meeting place of the Jewish Labor Alliance, the Bund, which fought anti-Semitism and job discrimination, and rallied opposition to Nazism. Apparently, this early exposure to radical politics shaped Mom’s lifelong dedication to the Democratic Party and movements for social justice.

When my son, Max, was being prosecuted on felony criminal conspiracy charges following the 2008 Republican National Convention in St. Paul, my mother became his energetic defender, soliciting money for the RNC 8’s legal defense fund from friends, relatives and strangers. We soon let her know that the group’s defense committee had an efficient fundraising mechanism, so she could ease up on her efforts.

I asked Max what he thought of his late grandma, and he replied: “She was a badass.” (That’s a term of approbation.)

Last July, I happened to be watching a local TV newscast, which reported on a rally at the state Capitol against same-sex marriage. When the reporter swooped in on the counterprotest, there was my mom before the camera and microphone, waving a rainbow flag and proclaiming her belief that all of her children deserved to have equal rights to marry whomever they loved.

My mother also was a passionate supporter of Israel, visiting the Jewish state at least twice. On one trip my folks participated in the Volunteers for Israel program, helping out at a hospital. Back on the homefront, my parents were recognized by Jewish Family Service in 1980, for serving as a host family with the Russian Resettlement Program.

My relatives, sometimes a fractious lot, have mentioned that my mom was the peacemaker in our family. She was the one who brought together feuding factions. And she also kept in touch with the Waller relatives who remained in Ukraine and then made aliya to Israel in 1991. In 2007, I finally met some of my Russian cousins in Israel.

Returning to the early biographical details, my mom was just out of high school when someone introduced her to a young man from the West Side of St. Paul, Harold “Hersh” Specktor. He was back from World War II, several years older, a worldly figure. He apparently swept 19-year-old Anna Waller off her feet. They were married Dec. 7, 1947, at the old Temple of Aaron Synagogue.

My parents’ love for one another produced me, Murray, Stacy Finkelstein, who lives with her family in Plymouth, and Jonathan, who lives with his family in Dublin, Ireland. We lived in St. Paul’s Highland Park neighborhood; then our dad, a carpenter and building contractor, built a spacious house for us in Mendota Heights. Over the past 46 years, the house on Lilac Lane was the hub for Jewish holiday dinners, Passover seders, brunches and other simchas.

As many of you know, I was standing in this very spot less than three months ago delivering a eulogy for my father, who died Nov. 2. It’s been an incredibly heartbreaking and stressful several months for our family.

My sister Stacy was devoted to my dad during his final illness, and then helped my mom get settled in a lovely apartment this month. In an e-mail Stacy sent me last night, she mentioned that our mom, on a daily basis, expressed “her love and gratitude” for my sister’s efforts to ease her burdens.

This is what Stacy wrote: “She expressed [her gratitude] to me alone, and with others present, which to me felt embarrassing at times, since I was just doing what I should in return for all that she did for me growing up all these years. I couldn’t imagine having done it any other way; she deserved all that I gave her and more, and I hope that I can carry on that legacy so that my children feel that kind of love and admiration for me.”

There’s nothing that I can write that is more heartfelt than Stacy’s remembrance.

My younger brother, Jonathan, who lives in Dublin, Ireland, arrived here Sunday night. I asked my siblings for help with this eulogy, and Jonathan wrote that our mom “was thoroughly loving, compassionate, considerate and thoughtful. Her kindness and quickness to empathy and praise were her nature.”

Jonathan added: “To me, her youngest child, her loving, comforting and generous ways knew no bounds…. The idea of wanting the absolute best for her children could not have been surpassed by any parent.”

Our mom was the epitome of motherly and grandmotherly pride. Her grandchildren loved her and were loved effusively in return. She was the ever-bright sun of affection to Jonas, Max, Isaac, Robb, Eli, Zoe, Ariel and Oliver.

And our mom loved her daughters-in-law — Maj-Britt, the love of my life, and Alessia, who is home in Ireland. She also loved her son-in-law, Steve Finkelstein, who has been a source of strength to all of us during our weeklong vigil at Mom’s bedside in United Hospital.

This eulogy could go on and on for quite some time, but I will try to wrap things up by pointing out that our mom was a vivacious and vital woman. She was a voracious reader (there’s a library book in her apartment that has to be returned). She played bridge three times a week, and I think that most of her regular, longtime bridge partners are here.

And Mom did what she could to keep healthy. A few years ago, she wrote a letter to her health care provider, Humana. I don’t know what she wrote, but they sent out a writer and photographer, and “Anna S.,” as they referred to her, graced the March 2008 cover of Live It Up!, the national magazine of Humana Active Outlook.

My mom’s quotation on the cover reads: “I’m not the type to sit still.” We can attest to the truth of that statement.

The magazine article focuses on how she manages her “high blood pressure, diabetes and asthma” through diet and exercise.

I think that becoming a cover girl at the age of 79 gave our mom a renewed sense of confidence. In 2008, she became a volunteer for Al Franken’s Senate campaign, attending house parties where he appeared — she even went to his campaign party on election night. At some point, Mom had Al sign a copy of the Humana magazine, and she had the cover framed.

Over the past couple of months, our mom embraced her new independent life. She loved her new apartment, where she lived for less than a week. On the morning of Thursday, Jan. 13, she slipped in the shower and hit her head. She had emergency brain surgery to remove a large hematoma pressing on her brain. The initial traumatic brain injury was followed by a stroke, a second devastating blow to her brain; she fell into a coma and left us early on Friday morning.

In a sense, we have already sat shiva. We knew that our mom would not leave the hospital.

We are bereft and bewildered by this sudden horrible turn of events. And we deeply appreciate all of the love and concern from our family and friends during this ordeal. This has been an extremely sad time for our family and for Mom’s wide circle of friends, from childhood to recent days.

Hopefully, memories of these recent days will fade away, and we can cherish memories of our mom from happier days. Please help us keep alive the blessed memory of Anna Waller Specktor, aleha ha’shalom.

Editorial: In solidarity with Ukraine

Editorial: Colleyville, ‘Maus,’ Whoopi and the neo-Nazis in Orlando