Erez and Noga cast their votes in the Windy City

(Editor’s note: What’s it like to be a native Israeli living in Minnesota? With brutally cold winter temperatures, Norwegian-American accents and buffets featuring hot dish, it’s a bit of a culture shock. Shlichim (Israel emissaries) Noga Shavit and Erez Frankel are living the Midwest life and will share their thoughts — both humorous and serious — in a monthly column in the Jewish World. Frankel moved to St. Paul in 2007 from Rosh-Pina, as the shaliach on behalf of the United Jewish Fund and Council of St. Paul. Last summer, Shavit arrived in Minneapolis with her family as the shlicha on behalf of the Minneapolis Jewish Federation. They are here to build connections between Israel and our local community. The first installment of their column details their recent trip to exercise their civic duty — a road trip to Chicago to vote in the Israeli elections.)
Â 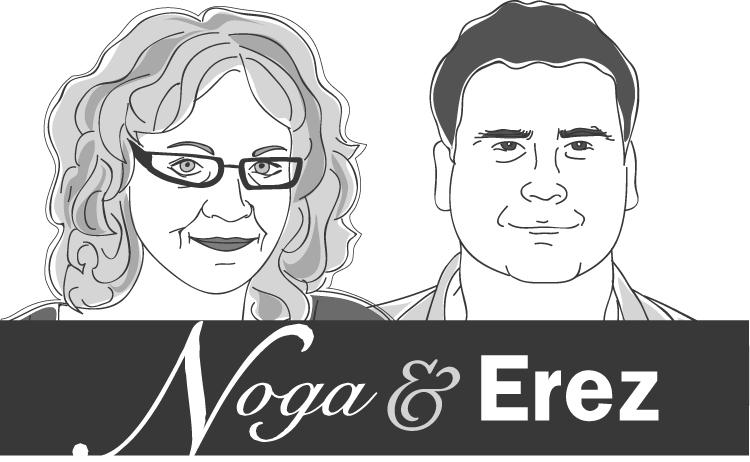 Â
It is 11 a.m. on Jan. 29, a cold Thursday morning in Chicago, and the offices of the Israel’s consulate to the Midwest haven’t been so crowded and busy for quite some time. In the hallway outside the conference room (which was turned into an improvised polling place) some 15 shlichim from their temporary posts across the Midwest are impatiently awaiting their turn to cast their votes.
Political discussion and propaganda are strictly forbidden in the room, and yet names of parties, leaders and slogans are thrown in the air like ping-pong balls. It feels very Israeli but differs greatly from the five-minute walk or ride to a local polling place. This time around it took us eight long hours by car and bus to get from the Twin Cities to Chicago in order to execute our sacred civic duty.
The procedures and settings are not the only differences here (not to mention the rigorous identification process conducted by the chief security officer just to let us in the building). All the ballot notes are blank, which means that we have to write down the name of the party we wish to vote for ourselves. That’s right — we are actually selecting parties, not candidates.
It might sound simple, but in Israel, parties are represented by a letter or a combination of letters, which often have nothing to do with the actual name of the party. For example, you might think that letter “L” stands for the Likud party — but it actually represents Yisrael Beiteinu, while the Likud party is represented by a combination of three letters. It’s an extensive process, as we are choosing from a lengthy list of more than 30 parties that are campaigning. The entire list is stuck to the ballot box and we meticulously go over it to avoid making a mistake. Then, we put the note in a double envelope and insert it in the ballot box.
By doing so, we joined about 1,000 Israelis serving in the U.S. on behalf of the Ministry of Foreign Affairs or other national organizations. A small number indeed, but as we all know — especially for those of us living in Minnesota — every vote counts. Israelis living abroad who are not affiliated with an Israeli national organization (an estimated 500,000 to 750,000) can only vote within the borders of Israel. This decision was made as part of the ethic that only those living in Israel should have the power to influence the nation’s politics.
This is very different from the way elections are conducted in many other democratic states, including the U.S. Absentee ballots are not an option, which explains our trip to Chicago’s Israeli consulate, one of 10 locations in the U.S. where Israeli representatives can vote.
As we waited in line, many of the shlichim who came to Chicago had questions and concerns. It is hardly surprising, as polls indicate that 30 percent of Israelis are undecided. But there we were, required to make this important decision 12 days before all other Israelis. Should our choice be based entirely on the leader of the party — a potential prime minister? Or should we put more emphasis on the party’s platform and its past experience? Could we follow our hearts and vote for a small party, representing our own beliefs more accurately, or should we vote for a bigger party, less desirable to us but bearing better chances to be the one calling the shots?
Some of us were 100 percent certain and filled with self-conviction; others were still debating. But when the moment arrived, a decision had to be made — there is, after all, only one chance to make a difference.
We didn’t expect to undergo this experience of voting while living abroad. General elections were not supposed to be held in Israel before the spring or fall of 2010. But unique political circumstances changed that, and what can we say? We voted from afar with our hearts close to home.