Levin’s The Last Ember is the Community Reads selection of the 2010 Twin Cities Jewish Book Fair, which continues at the St. Paul JCC

As part of the Twin Cities Jewish Book Fair, Community Reads is a recent initiative designed to build connections in the community by starting a conversation around a good book. This year’s selection is a New York Times bestseller:Â The Last Ember, the debut work by novelist Daniel Levin.

Levin’s book is an archeological mystery thriller set in Rome and Jerusalem. It follows Jonathan Marcus, a young American lawyer and a former doctoral student in classics, who has become a sought-after commodity among less-than-scrupulous antiquities dealers. But when he is summoned to Rome to examine a client’s fragment of an ancient stone map, he stumbles across a startling secret.

The discovery reveals not only an ancient intelligence operation to protect an artifact hidden for 2,000 years, but also a ruthless modern plot to destroy all trace of it by a mysterious radical bent on erasing all remnants of Jewish and Christian presence from the Temple Mount.

The St. Paul JCC caught up with Levin and asked him a few questions about his book. 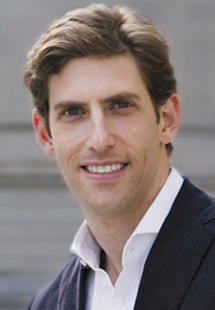 JCC: What led you to write this story?

DL: The level of ancient espionage in Rome and Jerusalem always fascinated me as a classics student. I kept seeing things like an errant mark in the margin of a Renaissance manuscript, or was interested in some unexplained murder. Ancient mysteries stirred my imagination.

In the beginning of the novel, for example, an ancient princess is found perfectly preserved, floating naked inside an ancient column filled with honey, amber and other oils. It’s true that Roman corpses wereÂ naturally preserved — some 15th-century Roman masons even found one. Like every other mystery in the novel, this mystery was driven by a single question: What if all of this ancient intrigue had deadly modern consequences? That wasÂ The Last Ember’s first spark, so to speak.

JCC: How were you affected by current events (both with regard to illegal trading in antiquities and with the digging and dumping on the Temple Mount by the Waqf)?

DL: In reality, the antiquities trade is a very bloody business and I’ve always found its moral tension fascinating. We see these ancient artifacts in museums, glistening in their display cases, but many are soaked in the blood of the trade. I try to capture that in the protagonist of Jonathan Marcus. When the novel opens, he’s no boy scout. He’s a lawyer defending less-than-scrupulous antiquities dealers, but he, himself, has a great deal of love for the artifacts. That puts him in a morally complex position — do you defend your client or your values?

While clerking in Israel, I saw historical revisionism taking place. The Waqf Authority was removing 20,000 tons of illegally excavated rubble from the Temple Mount to the Valley of Kidron. In researching other sites around the world, I found that most of the illegal excavations occurred for political reasons — people trying to alter the past in order to control the future. Then I started to wonder: What if someone was willing to murder to control not just the future, but the past?

JCC: Tell us about your research, where did it take you?

DL: From the labyrinth beneath the Colosseum to the biblical-era tunnels of Jerusalem, to the arms tunnels of Gaza, the characters run for their lives from murderous historical revisionists. Yes, I actually researched these settings on location and found myself in some tight spots — literally!

As depicted in the novel, the Jewish catacombs really do have methane from Rome’s street pollution, and it’s a bit tough to breathe the farther in you go. Beneath the Colosseum, it’s so cold and clammy you can see your breath. I was also a visiting scholar at the American Academy in Rome, where I did the majority of my manuscript research in a beautiful, 19th-century rare books library.

The historical mysteries inÂ The Last Ember are from real historical texts, including the story of Flavius Josephus. We know that some strange things happened in Emperor Titus’ palace after he returned from sacking Jerusalem in 70 A.D. Everyone within the emperor’s immediate circle — his mistress Berenice, his court historian Flavius Josephus, his favorite stage actor Aliterius — were either executed or mysteriously disappeared. Titus really did go mad and, on his deathbed, his parting words were, “I have made only one mistake.” Piecing all of these strands together made for a wonderful mystery.

JCC: What did you learn that surprised you the most as you did your research?

DL: The Waqf Authority is an actual organization that has controlled the Temple Mount since the 12th century. I was surprised by their real-life secrecy, as well as the sheer scope of historical destruction. Thankfully, a new congressional bill has been introduced to confront their activities beneath the Temple Mount. I discuss it at length on our Web site, www.thelastember.com.

The comparisons I make between the Roman sack of ancient Jerusalem and this modern sack that’s happening in secret are sadly all too real.

JCC: How, as a writer, does one achieve suspense and “pedal-to-the-metal pacing?”

DL: Two things. First, real characters that you care about. Second, pacing that reveals too little rather than too much.

JCC: What message would you want to remain with readers after they have finished The Last Ember?

DL: When I began to work on this novel, it was about history’s fragility, but by the end I surprised myself. It’s about history’s resilience. So, what’s the one message? I suppose that, yes, history is as fragile as fire. But it only takes an ember to save it.

For information on Levin, visit: daniellevin.com.

The St. Paul JCC sponsors the 2010 Twin Cities Jewish Book Fair, which runs through Feb. 23, 2011. The remainder of the lineup for the book fair is as follows (all events take place at the St. Paul JCC, 1375 St. Paul Ave., unless otherwise noted):

• Gregory Levey, author of How to Make Peace in the Middle East in Six Months or Less Without Leaving Your Apartment, will speak 7 p.m. Thursday, Nov. 4. Levey describes the bizarre circumstances in which, at the age of 25, he served as the Israeli government’s speechwriter and one of its delegates at the United Nations, and then went on to become senior foreign communications coordinator and English speechwriter for Prime Ministers Ariel Sharon and Ehud Olmert. 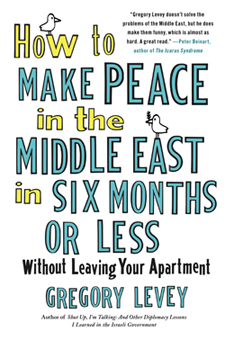 The American Jewish World will co-sponsor the appearance of Gregory Levey, whose new book is titled “How to Make Peace in the Middle East in Six Months or Less Without Leaving Your Apartment.”

• Lucy Rose Fischer, author of I’m New at Being Old, will speak 7 p.m. Tuesday, Nov. 9. Offering wit, whimsy and fanciful art, this picture book for women explores the personal experience of a most common phenomenon — getting older.

• Gal Beckerman, author of When They Come For Us We’ll Be Gone: The Epic Struggle to Save Soviet Jewry, will speak 7 p.m. Thursday, Nov. 11. Beckerman has chronicled the story of nearly three million Jews who were trapped inside the Soviet Union at the end of World War II.

• The 2010 Community Reads Selection is Daniel Levin’s The Last Ember; he will speak 7 p.m. Saturday, Nov. 13. The book spans the high-stakes worlds of archaeology, politics and terrorism in its portrayal of the modern struggle to define — and redefine — history itself.

Rimon: The Minnesota Jewish Arts Council will join forces with the Twin Cities Jewish Book Fair to host Jennifer Gilmore, author of Something Red, at a Rimon Artist Salon 3 p.m. Sunday, Jan. 9, 2011. As O Magazine describes the book: “Generations and politics collide in a stellar story about the legacies and secrets of the 1960s.”

Also, Sue Fishkoff, author of Kosher Nation: Why More and More of America’s Food Answers to a Higher Authority, comes to town 11 a.m. Wednesday, Feb. 23. In her account of a Bible-based practice that has grown into a multi-billion dollar industry, Fishkoff travels throughout America and to Shanghai, China, to find out who eats kosher food, who produces it and who is responsible for its certification.

A machinist with a Magen David