A machinist with a Magen David

The Minnesota Department of Human Rights has found probable cause that William E. Broze, a machinist who got fired for wearing a Star of David (Magen David) pendant, was unfairly discriminated against by his employer.

In a letter to Broze dated Oct. 5, Department of Human Rights Commissioner James Kirkpatrick III noted that his agency had found probable cause of an “unfair discriminatory practice” by Cherne Industries, Inc., of Edina, and was forwarding the case to the Minnesota Attorney General’s office “to schedule a conciliation conference” to attempt to work out a settlement.

Broze, a Plymouth resident who had worked at Cherne for 29 years, ran afoul of the company’s new dress code, part of a policy manual issued in August 2009. An addendum to the policy manual spelled out restrictions on wearing jewelry, including pendants, with an exception for medical alert necklaces, which could be worn with break-away chains.

The machinist initially told his superiors that he was not sure that he could comply with the policy that prohibited him from wearing a Star of David pendant (which Broze refers to as a “Mogen David”). He said that he wore the necklace and pendant inside of his shirt. Broze explained to his bosses that the Star of David pendant had important religious significance for him.

Two days after meeting with the company president, Joel Statts, Broze was called to a Sept. 4, 2009, meeting with Statts and handed a termination letter. 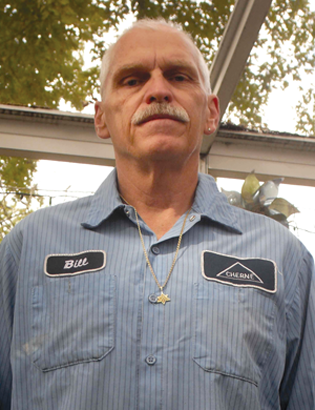 William Broze is shown wearing his Star of David pendant, which he customarily tucked inside of his shirt while at work. (Photo: Courtesy of Mansfield, Tanick and Cohen, P.A.)

The memorandum from the Department of Human Rights investigated Broze’s claim and determined that he had a “sincerely held religious belief — that he took vacation days to honor the Jewish high holidays,” and that he and his wife “visited the ‘holy land’ frequently.” The memo further noted that Broze’s “wearing of his Mogen David pendant on a necklace was a bona fide religious practice, akin to Christians who believe in wearing a cross every day to signify their religion.”

Broze’s superiors at Cherne, according to the memo, were aware that Broze attached religious significance to the Star of David pendant; however, they never offered “any reasonable accommodation” to him when he told them that his religious practice conflicted with the new dress code.

The Department of Human Rights memo also states: “Evidence shows that after [Broze] offered to remove his Mogen David necklace because he was fearful of losing his job — a choice he should not have been forced to make — [Cherne] still terminated him.”

The state agency’s investigation found that Broze met or exceeded expectations, according to 2009 performance evaluations. The only concerns about his “interpersonal skills” were related to two meetings with the company’s safety director, at which the dress code was discussed, and Broze objected to removing his Star of David pendant.

The memo concluded that Broze’s request for accommodation of his religious practice — “protected conduct under the Human Rights Act, as well as Title VII of the Civil Rights Act of 1964” — was rebuffed by his employers: “There is probable cause to believe [Cherne Industries] engaged in illegal discrimination, on the basis of religion, in this case.”

Marshall Tanick, of the Mansfield, Tanick and Cohen firm in Minneapolis, is Broze’s attorney. Tanick told the Jewish World last week that the Minnesota Attorney General will try to schedule a conciliation session with Broze and with individuals from Cherne.

Regarding Broze’s reaction, Tanick said that his client is “pleased” by the Department of Human Rights’ conclusions.

“I think what he feels is most notable about this is the portion of the determination that points out that the company failed to engage in what’s called an ‘interactive process’; and that’s been his claim — that they should have sat down, and really tried to talk with him and work out an arrangement, rather than just order him to take off the Star of David, which he then said he’d do; and after he said he’d do it, they fired him.”

In the conciliation process, Broze can seek reinstatement to his job, attempt to regain wages lost since his termination, and “the law also allows punitive damages, and damages for emotional distress, as well as compensation of attorney’s fees,” said Tanick, who added that the law also provides for a civil fine that the company would pay to the state.

If conciliation under the auspices of the Attorney General fails to produce an agreement, Tanick said that the matter can be litigated in court.

A call to a human resources executive with Oatey Co., in Cleveland, Ohio, the parent company of Cherne Industries, was not returned.