Talking about Israelis and Palestinians

Gloria Dei Lutheran Church, the Islamic Center of Minnesota and Mount Zion Temple will present an evening discussion series titled “Israelis and Palestinians: A Conversation among Jews, Christians and Muslims.”

The programs, which are free and open to the public, will feature local speakers who will share their own stories of the Israeli-Palestinian conflict. The series will take place 7 p.m. Mondays, Oct. 4, 11 and 18 in the Kay Fredricks Room, located on the third floor of the Klas Center at Hamline University in St. Paul.

Co-sponsors are the St. Paul Interfaith Network (SPIN); the Jay Phillips Center for Interfaith Learning of the University of St. Thomas and St. John’s University; and the Wesley Center for Spirituality, Service and Social Justice of Hamline University.

According to Rabbi Amy Eilberg, who directs interfaith dialogue programs for SPIN and the Jay Phillips Center, the initiative was first proposed by Mount Zion’s Rabbi Adam Stock Spilker, and is part of the synagogue’s yearlong programming focus on Israel.

“Many of us in interfaith work have had the sense that the Israeli-Palestinian conflict is an issue that is among the hardest issues to address in interfaith dialogues,” Eilberg told the AJW last week. “While people talk about it individually, we tend to avoid it as a programmatic issue because many people assume that if we touch the issue, the conversation will be explosive and counterproductive.” 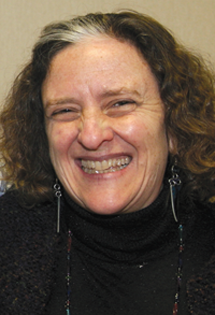 Rabbi Amy Eilberg: This is about humanizing the conflict.

Eilberg said the faith groups spent six months putting the series together and were committed to addressing the subject using a new approach.

“I think we had all reached the point where we felt confident that our interfaith leadership relationships were strong enough that we could really come together and create a different type of program,” Eilberg said. “Not only will it allow for a conversation about the issue, but really model a different way to talk about the issue — with respect and empathy and a genuine desire to understand another person’s perspective.”

The series will begin on Oct. 4 with “Telling Our Stories: Two Palestinian Voices,” featuring Hussein Khatib, executive director of the Al-Aqsa Institute of Minnesota, and attorney and activist Ziad Amra, a former legal advisor to the Norwegian Agency for Reconstruction and Development (NORAD) in the Palestinian Territories. On Oct. 11, University of Minnesota Professor Mira Reinberg, who focuses on French philosophical theories on the conduct of war and conflict, and Oren Gross, theÂ Irving Younger Professor of Law at the University of Minnesota Law School,will present “Telling Our Stories: Two Israeli Voices.” Rev. Tom Duke, Ph.D., of theÂ St. Paul Area Council of Churches, will moderate both sessions.

On Oct. 18, Ron Young of the National Interreligious Initiative for Peace in the Middle East will discuss “Roads to Resolution: What Is Our Role as Americans?” Following Young’s presentation, Eilberg will moderate responses from three local religious leaders.

“We’re not endorsing [Young’s] particular model, but raising a set of questions really exploring the question of what should we, as Americans, be doing, to which, of course, there are a variety of answers,” Eilberg said.

In the second half of each session, participants will be seated at mixed tables where facilitators will lead a structured dialogue to process what was presented.

“I hope very much that people at their tables will have an experience of having participated in, not just witnessed, but also participated in and practiced skills of respectful dialogue, of listening to views different from one’s own, and speaking one’s truth without blame or disrespect or insult,” Eilberg said.

Eilberg said the work of interfaith dialogue is always important, but this series is particularly timely. Religious tolerance has been brought to the forefront in light of the planned Islamic Center near Ground Zero, and the Israelis and Palestinians came together in recent peace talks.

“For those of us who actually don’t live, militarily speaking, in a war zone, interfaith dialogue and other ways of actively engaging in relationships of learning and respect with members of groups different from our own is, I believe, one of the best ways that we, as individual citizens, can contribute to the cause of peace in the world,” Eilberg said. “We can contribute to the forces of ignorance and enmity and misunderstanding in the world, or we can choose to engage in activities that make us bridge builders.”

The cost of the series is free, but donations will be invited. For information, visit the St. Paul Interfaith Network’s Web site at: www.spacc.org/spin.

When Arabs massacred Jews for sitting at the Wall