When Arabs massacred Jews for sitting at the Wall

The Grand Mufti of Jerusalem sparked an anti-Jewish pogrom in pre-state Palestine, which reverberates through history

As Israelis and Palestinians struggle with a 21st century peace process, the world must face the forgotten history that was so pivotal in determining the present crisis. In many ways, a turning point was the day Arabs massacred Jews because they dared to sit at the Wailing Wall while praying.

This simple act of prayer was so unacceptable to Arabs that it helped launch a worldwide crisis of hate that provoked a global Islamic jihad, forged an Arab-Nazi alliance during the Holocaust, and still echoes today.

The year was 1929. Jewish Palestine was still being settled by waves of Eastern European refugees. The League of Nations Mandate for Palestine included the provision for a Jewish homeland. The Balfour Declaration was a matter of international law. But the Arabs in Palestine refused to co-exist with Jews, whom they regarded as having lesser rights. 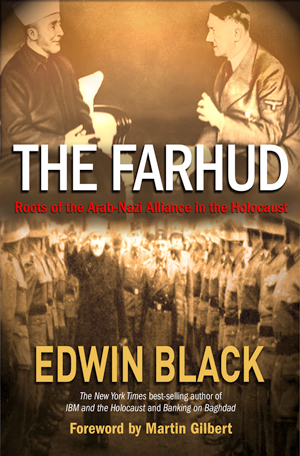 Edwin Black will discuss his latest book, The Farhud: Roots of the Arab-Nazi Alliance in the Holocaust, Oct. 7 at the University of Minnesota.

Islam had been at war with the Jewish people since its defining inception in 627 C.E., when Muhammad exterminated the Jews of Mecca and launched the Islamic conquest that swept north and subsumed Syria-Palestina. For centuries, Jews and Christians in Arab lands were allowed to exist asÂ dhimmis, second-class citizens with limited religious rights. These restrictions were enforced by the Turks, who, until World War I, ruled the geographically undetermined region known as Palestine, which included Jerusalem.

When the Ottoman Empire fell after World War I ended in 1918, the British were obligated by the Mandate to maintain the Turkish status quo at the Wailing Wall. That status quo, according to numerous decrees underÂ Sharia, Islamic religious law, maintained that Jews could pray at the Wailing Wall — the last remnant of the Holy Temple — only quietly and never sit, even in the heat. Nor were Jews allowed to separate men from women during prayer.

The Jews revered the Wailing Wall as their holiest accessible place and a direct connection to God. But under Turkish and Arab tradition, the Wailing Wall was not the Jews’ holy site. Rather, Muslims revered the site as al-Buraq, the place where Muhammad tethered his winged steed during his miraculous ascent to heaven.

Therefore, the Wailing Wall became preeminently a Muslim holy place, only available for Jewish visitation with permission and under strict guidelines that would not connote independent worship or ownership of the Wall.

In 1928, on Yom Kippur, Jews decided to bring benches and chairs to sit while they prayed, and they also brought aÂ mechitza, in this case, a flimsy portable partition to separate men from women. This provoked outrage among Arabs, and the British even tried to pull chairs out from under people to force them to stand.

The offense catapulted al-Hajj Muhammad Amin al-Husseini, the grand mufti of Jerusalem, to sudden international Islamic importance as Muslims everywhere — from India to London — objected to Jews sitting. Husseini even convened an emergency international conference of Muslims in Jerusalem to stop Jews from sitting at the Wall to pray.

The mufti and his machinery also began a nonstop protest movement against the perceived Jewish encroachment on the Wall. As the chief religious authority, it was Husseini who directed that the muezzin, the man who calls Muslims to prayer from the minaret, position himself within earshot of the Wailing Wall pavement, and then dial the volume up to rile Jews during prayer and prove Islamic dominance. The mufti also was the one who permitted mules to be herded through the Jewish prayer area, dropping dung and creating the feel and smell of what one Jerusalem newspaper termed “a latrine.”

On Aug. 15, 1929, when Jews again marked the holiday by sitting, and also chanted, “The Wall is ours,” the Arabs began yet another in a series of bloody massacres. The massacres in several cities culminated in unspeakable atrocities at Hebron.

It began in Jerusalem, with cries of: “Itbach al Yahood! (Slaughter the Jews).” With knives and clubs, the mob attacked every Jew in sight, burned Torah scrolls, and yanked supplication notes to God from the cracks in the Wall and set them aflame.

Attacks spread throughout the land over the following days. Jews were stabbed, shot, beaten down with rocks, maimed and killed in Jewish towns. The chaos continued for days. With thousands of dagger- and club-wielding Arabs swarming throughout the city hunting Jews, wire services transmitted headlines such as “Thousands of Peasants Invaded Jerusalem and Raided All Parts of the City.”

Martial law was declared. Armored cars were brought in from Baghdad. British airplanes swept in to machine-gun Arab marauders. Violence continued to spread throughout Palestine. Jews fought back, and retaliated with bricks and bars and whatever they could find. Then, on Aug. 23 and 24, 1929, Hebron became a bloody nightmare.

House to house, Arab mobs went, bursting into every room looking for hiding Jews. Religious books and scrolls were burned or torn to shreds. The defenseless Jews were variously beheaded, castrated, their breasts and fingers sliced off, and in some cases their eyes plucked from their sockets. Infant or adult, man or woman—it mattered not. The carnage went on for hours, with the Arab policemen standing down — or joining in. Some 67 Jews were brutally murdered.

London dispatched special investigative commissions that determined that under the Sharia status quo, Jews were not permitted to sit at the Western Wall. Jews were even blamed for provoking the massacres by deliberately sitting.

The mufti of Jerusalem used the Wall controversy to continue his campaign against the British and the Jews. As part of that war, the mufti led an international and popularly accepted Arab and Islamic alliance with Nazi Germany. Eventually, when the British tried to arrest him, he fled to Iraq. There, the mufti and Nazi agents helped inspire the 1941 Farhud, a two-day spree of killing, looting and raping the Jews of Baghdad.

Once the British finally helped restore order, the mufti fled again, this time to Germany, where he was taken under the personal auspices of Adolf Hitler and Heinrich Himmler. The mufti formed a Muslim Waffen-SS division numbering 8,000, which partnered with the bloodthirsty Ustasha in Croatia to commit some of the most heinous crimes in the Holocaust.

The alliance with the Nazis spanned every aspect of the war, from intelligence offices in Paris to artillery battalions, to a plan to exterminate all Jews in Palestine. This alliance extended beyond the mufti of Jerusalem — it was a movement of popular international Islamic fervor that stretched across the Middle East and Europe.

After the fall of Hitler, the legacy of hate continued in the post-WW II expulsions of a million Jews from Arab lands. Periodically, the fervor that ignited the massacres of 1929 surfaces even today. Intifadas arise, riots erupt and the Arab rallying call, spoken and collectively remembered, continues in Jerusalem — where Jews should not be permitted to sit at the Wailing Wall when they pray.

Edwin Black is the bestselling author ofÂ IBM and the Holocaust. This article is drawn from his soon-to-be-released book,Â The Farhud: Roots of the Arab-Nazi Alliance in the Holocaust. Black will speak about his new book 12 p.m. Thursday, Oct. 7 at the Nolte Center for Continuing Education, Room 140, on the University of Minnesota’s East Bank Campus. Pizza will be served, followed by the program. For information, contact the Program in Human Rights and Health at 612-626-6559, or e-mail: phrh@umn.edu. The event is co-sponsored by the Center for Holocaust and Genocide Studies.

Also, Black will appear with his latest film,Â War Against the Weak: Eugenics and America’s Campaign to Create a Master Race, 6:30 p.m. Thursday, Oct. 7 at the Sabes JCC, 4330 Cedar Lake Rd. S., St. Louis Park. For information, visit: www.waragainsttheweak.com, or contact Peggy Mandel at: pmandel@sabesjcc.org or 952-381-3466.