Noah Solomon talks to the AJW about his musical career in Israel and the U.S.

Noah Solomon couldn’t quite recall the details of a wedding he played in the Twin Cities several months ago.

The vocalist and guitarist for the band Soulfarm will return for a Jan. 15 concert as part of the Beth El Music and Arts (BEMA) Coffeehouse Series. The American Jewish World is a media sponsor of the event.

Weddings are often on Sundays, Solomon explained, so the engagements don’t interfere with band gigs at festivals, colleges, JCCs and clubs.

“It helps the band keep moving on,” he said, regarding wedding parties. “We enjoy doing weddings sometimes.”

Soulfarm blends rock with myriad influences, from the Middle East to Ireland and the Appalachians. Solomon and C Lanzbom form the core of the group. They met in the early 1990s, in the Israeli village of Modi’im, which was founded by the late Shlomo Carlebach, a charismatic and influential liturgical singer. The duo played around Israel, and sometimes accompanied Carlebach, who died in 1994. They later moved to New York City and founded a group called Inasense, which became Soulfarm in 2000. 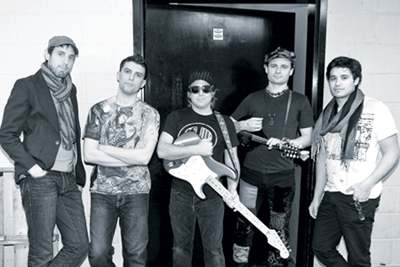 Noah Solomon (second from right) and his Soulfarm bandmates will perform in concert Jan. 15 at Beth El Synagogue. (Photo: Courtesy of BEMA)

Speaking recently to the AJW from his home in the Bronx, Solomon said that he will be playing guitar, mandolin and djembe (a West African drum that is shaped like a large goblet) at the Beth El show. Lanzbom plays guitar. The Soulfarm rhythm section is comprised of Yoshie Fruchter on bass and drummer Ben Antelis.

“The band’s gone through a lot of changes over the years, but this is the lineup we’ve had the last couple of years,” Solomon noted.

The choice of songs for the album reflects some popular feedback urging a return to more Jewish material, according to Solomon.

“We write a lot of original music and it’s mostly in English — and more on the rock side,” he said. “I guess some of the fans felt like — and we felt as well — that maybe it’s time to make something that featured some of the more Jewish stuff we do.”

The new Soulfarm album includes a couple of songs from the Breslover Hasidic tradition. “The title track is actually an old gospel song that we rearranged to make it more of our style, changed the key on it and the melody slightly,” the 38-year-old musician recalled.

He contrasted the sound ofÂ Holy Ground with the band’s previous album,Â Monkey Dance, a highly produced studio effort that featured loops and other embellishments.

Holy Ground is a “more organic album,” Solomon said, and reflects what the band delivers in a live performance. The upbeat album ranges over many styles, showcasing Solomon’s vocals and the accomplished musicianship of the Soulfarm crew.

I happened to hear a podcast from “The Beat” on Israel National Radio, which covered the RockAmi festival last October in Jerusalem. The segment included some Soulfarm music.

Solomon fondly remembered the band’s gig at RockAmi, and mentioned that he often returns to Israel, where he plays and visits with family members.

“I come from a large musical family,” he said. His brother, Yehuda, plays with a band called Moshav in Los Angeles. When the group was known as the Moshav Band, another brother, Yosef, also was a member; he has returned to Israel. Yehuda Solomon, a vocalist and percussionist, has a credit on Peter Himmelman’s new album,Â The Mystery and the Hum.

Noah Solomon said that he’s the oldest of eight children, seven brothers and one sister.

Their father, Ben Zion Solomon, played fiddle and banjo in one of the pioneer Israeli rock bands, the Diaspora Yeshiva Band. Solomon said that his father now archives music and runs a music studio in Israel.

Soulfarm has shared stages with such popular acts as Shawn Colvin, Bruce Hornsby, Perry Farrell and The Wailers. They are flying out especially for the Jan. 15 concert for BEMA (Beth El Music and Arts), which has hosted some wonderful musical evenings over recent years.

Solomon advised that his group’s music encompasses varied genres, from East to West; but the resulting sound is accessible to a wide audience.

“It’s in a palatable, pop-rock format,” he said, and added that they’re “bringing something real authentic” to the Jewish and Middle East melodies they incorporate. “I did live a big chunk of my life in Israel.”

Kicking back against clawback

Kicking back against clawback