Any of these describes this modern-day Bezalel, who infuses his workshops with the spirit of Hiddur Mitzva (beautifying Jewish ritual). In nationwide programs, the affable New Yorker asks the right questions to help participants consider the connection between beauty and holiness, and the role of Jewish observance in their lives.

“I love it when viewers see things that I wasn’t aware of when I made my works,” he said recently, when reached by phone in New York. “In this way they weave their own personal narratives.”

Those in the know will run, not walk, and bring friends to join the celebrated facilitator this fall at events presented by Rimon: The Minnesota Jewish Arts Council and the Robert and Janet Sabes Center for Jewish Arts and Humanities at the Sabes JCC.

To inaugurate his local visit, Kahn will conduct “Artistic Vision and Spiritual Audacity,” a Rimon Artist Salon that will take place 1 p.m. Sunday, Nov. 14 at painter Bonnie Heller’s warehouse district studio in Traffic Zone Center for Visual Art, 250 Third Ave. N., Minneapolis. Heller will facilitate the discussion surrounding Kahn’s belief that anyone can have artistic vision and engage their spiritual side through art.

Rimon’s Salon series was initiated in 2007 to explore the critical role the arts play in understanding our world. Rimon is an initiative of the Minneapolis Jewish Federation. 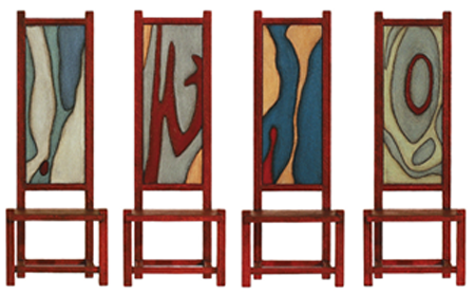 Kahn will also lead “A Meditative Art Workshop and Discussion” 6:30 p.m. Sunday, Nov. 14 at the Sabes JCC, 4330 Cedar Lake Rd. S., St. Louis Park. Focusing on issues of personal ritual and their repetitions, he will direct participants in creating their own ceremonial objects during the session.

“Kahn is likely America’s most articulate lecturer about Jewish ceremonial art,” said Peggy Mandel, programmer in the Sabes JCC’s Center for Jewish Arts and Humanities. “We look forward to involving the community in a unique experience.”

Visitors to 10 Artists in 30 Days can observe local artists who will work for two to three days each as they craft new pieces in the Sabes JCC’s Tychman Shapiro Gallery in November, inspired by Kahn’s notion of sacred spaces.

“Kahn’s approach has had a ripple effect throughout Jewish cultural circles,” said gallery director Robyn Awend. “The chance to work with him should have a lasting impact on our population.”

An opening reception for the completed creations will take place on Sunday, Dec. 5.

Deeply informed by his Jewish education and by his refugee family, Kahn relates that as children, he and his sister were unusual in Washington Heights because they knew their grandparents, who managed to get out of Nazi Germany alive, although other relatives perished.

“I feel so lucky to be alive,” he said, “and I want to help others embrace the world’s vitality through art.”

Kahn was educated at a Talmudic academy, studied in Tel Aviv and Jerusalem for four years, and returned home to receive a B.A. in photography from Hunter College. Kahn received an M.F.A. in painting from Pratt Institute in 1978.

He is an observant Jew, whose conversations reference biblical portions as often as analogies to avant-garde art practitioners. Kahn joined the ranks of stellar contemporary artists with a 1985 invitation to New Horizons in American Art at New York’s Solomon R. Guggenheim Museum. His work has since been featured nationally and internationally in more than 40 solo exhibitions, and more than 60 museum and group shows.

Lately Kahn has concentrated on creating sacred spaces and has had more than a dozen commissioned installations found in hospitals, temples and other public sites. Kahn designed paintings, seating and lighting in a room of refuge for those who serve the suffering in the HealthCare Chaplaincy on Manhattan’s east side. The cumulative effect is of sitting in a relaxing porch or sunroom.

The book, Tobi Kahn: Sacred Spaces for the 21st Century, was published in 2009 for his New York exhibition at the Museum of Biblical Art.

Local museumgoers may view Kahn’s work at the Minneapolis Institute of Arts’ Harold and Mickey Smith Gallery of Jewish Arts and Culture. Kahn’s inventive omer counter (used to number the days between Passover and Shavuot) includes 49 dark-hued wood pieces of different shapes that fit into specific slots over time, thus implementing a personal ritual and a sacred act.

The cost for the Meditative Art Workshop and discussion is $20 for premium/community members; or $26 for general program participants (includes all supplies and materials for the workshop). For information and to register, contact Peggy Mandel at 952-381-3466 or pmandel@sabesjcc.org.

Editorial: After the Nov. 2 elections

Pittsburgh has become a hub for white supremacists