By RON KAMPEAS
WASHINGTON (JTA) — All but resigned to the inevitability of a Palestinian push for statehood at the United Nations later this month, Jewish groups are hoping that its effects can be blunted through aggressive diplomacy and the threat of action by the U.S. Congress.
Jewish groups are urging foreign diplomats to push for language that would make any resolution more palatable to Israel and supporting a renewed push to restart the peace process as an incentive. Meanwhile, they are counting on congressional penalties against the Palestinians should the eventual resolution be unfavorable to Israel. 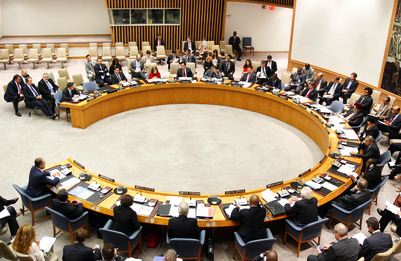 Israel and its supporters hope to head off a vote in the U.N. Security Council recognizing a Palestinian state when the council meets again in late September. The council is shown meeting Aug. 30, 2011 to discuss developments in Kosovo. (Photo: United Nations/Rick Bajornas)

“It’s still interesting,” said Daniel Mariaschin, the executive vice president of B’nai B’rith International, expressing the cautious optimism characteristic of a range of conversations with Jewish officials that engage in U.N. forums. “We don’t know what kind of resolution will be introduced.”
The Obama administration is pressing hard to avoid any resolution, and is hoping instead to get the parties back to the table under the aegis of the Quartet, the grouping of the United States, Russia, the United Nations and the European Union that guides the peace process.
The administration recently dispatched Dennis Ross, the National Security Council’s Middle East adviser, and David Hale, its Middle East peace special envoy to the region, to try to come up with a formula for moving forward that will convince the Palestinians to shelve their U.N. bid.
“I have been in contact with the White House, with Dennis Ross, David Hale and their team, and I know they’re working extremely hard with the Quartet,” Rep. Nita Lowey, D-N.Y., the senior Democrat on the foreign operations subcommittee of the U.S. House of Representatives’ Appropriations Committee, told JTA. “They’ve been working nonstop to be creative with their language.”
Insiders with information about the Quartet negotiations, however, say they don’t have much hope that the American efforts will succeed. The Palestinians and Russia oppose language in a statement that would relaunch negotiations that include recognizing Israel as Jewish state as well as “realities on the ground” —Â code for large settlements.
Palestinian officials continue to insist that they intend to go through with their statehood effort and will ask the U.N. Security Council to admit a Palestinian state as a U.N. member. The United States has made clear that it would veto any such resolution before the Security Council, insisting that the proper venue for achieving Palestinian statehood is at the negotiating table with Israel.
A resolution recognizing Palestinian statehood in the U.N. General Assembly would likely gain the support of a majority of member nations, but a General Assembly vote would be largely symbolic and would not grant U.N. membership to the Palestinians.
Jewish groups say efforts are under way to persuade key countries to shape a resolution that would be more favorable toward Israel.
“We’re in a much better place than a couple of months ago,” said Jennifer Laszlo Mizrahi, the president of The Israel Project. “A lot more of the diplomats are better educated about nuances and challenges and opportunities.”
A resolution recognizing the eventual necessity of Palestinian statehood might even be beneficial if it included the right language, Mizrahi said.
“A watered-down resolution that doesn’t say where lines are, doesn’t talk about refugees and recognizes the validity of a Jewish state, it’s a victory for all sides, it would be win-win for everybody,” she said.
Leading the outreach has been the American Jewish Committee, which has had 300 meetings with diplomats from 70 countries in the past three months — and expects a last-minute flurry of another 100 such meetings before the matter comes to a vote, which is expected by Sept. 21.
The AJC’s executive director, David Harris, said the message was getting across.
“There have been some in the Arab world who have said recently that this is not going to work, it’s not going to advance the goal of a Palestinian state, it may backfire, it may set the prospects for peace back, and the Palestinians may be blamed because this was their idea,” Harris said.
Lowey and Jewish communal officials have said that in private conversations, Palestinian leaders fear that they have painted themselves into a corner — that a failure to achieve statehood recognition would spur anti-government protests among Palestinians inspired by the Arab Spring.
The Anti-Defamation League’s national director, Abraham Foxman, said that might nudge the Palestinians toward accepting a General Assembly vote short of statehood recognition — one that upgrades the Palestinian U.N. delegation’s observer status.
“A lot will depend on language and how it’s presented,” he said.
He also noted that Palestinian Authority President Mahmoud Abbas has told Israelis in recent days that he would be ready to return to talks once a vote goes through, one way or the other.
Lowey said that might be too little too late and reiterated her warning made this summer with Rep. Kat Granger, R-Texas, the foreign operations subcommittee chairwoman, that the Palestinian Authority could lose much of the approximately $500 million in assistance it receives from the United States if it presses ahead with the vote.
“Both the House and the Senate are very clear in cutting off funds to the Palestinian Authority if they go forward and take the vote without going back to the negotiating table,” Lowey said.