A miscarriage of justice

The arrest and conviction of Julius and Ethel Rosenberg as Soviet spies was an enormous shanda — shame — for Jews in the still-antisemitic United States of the early 1950s.

But author Anne Sebba makes a pretty convincing argument that Ethel was wrongly convicted, betrayed by her brother’s lie, and that she never committed the espionage for which she and Julius were executed in 1953. 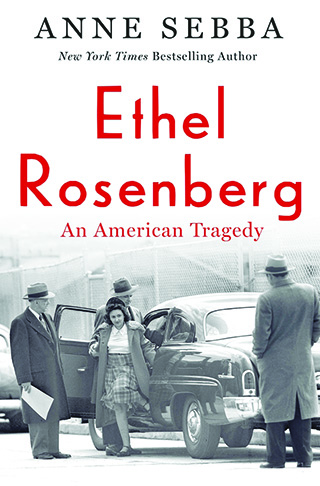 Her story “shows what happens when fear, a forceful and blunt weapon in the hands of authority, turns to hysteria and justice is willfully ignored,” says Sebba, a former Reuters foreign correspondent.

As spellbinding as a novel, Sebba’s Ethel Rosenberg shows Ethel as a devoted wife and mother who may have known that her husband was providing atom-bomb secrets to the USSR, but who was not a spy.

“Ethel was used as a pawn in the hope that the threat to her would elicit a confession from him,” Sebba says. “The authorities knew that actual evidence of Ethel’s ‘espionage’ was nonexistent, while without a confession by Julius, the evidence against him too might not be enough to convince a jury that he was guilty and send him to the electric chair.”

But “Ethel and Julius refused to the end to trade secrets or name other names to save their own lives,” Sebba says.

Wanting to say nothing that could harm Julius, Sebba says, Ethel repeatedly invoked the Fifth Amendment, perhaps leading jurors to suspect that she had something to hide.

Sebba says Ethel’s fate was sealed by her brother, David Greenglass. A 1943 draftee with a low-level machinist job at the Los Alamos nuclear research site, he stole information for Julius, who gave it to his Soviet handler. David claimed that Ethel typed information to give to the Soviet contact.

In 2001, he told CBS’ 60 Minutes that this was a lie to protect himself and his wife Ruth, who had conveyed information from David to Julius. David got a 15-year sentence. Ruth wasn’t charged.

Sebba says both Rosenbergs were committed to Communist ideas, not unusual during the Depression, when capitalism floundered. There’s no proof that Ethel was a party member, Sebba says, and the Communist Party USA wasn’t outlawed until 1954. Sebba points out that when Julius provided the secret information, the USSR wasn’t an enemy but an ally.

All of which is fascinating, told with reportorial clarity plus photos, notes, bibliography and index.

Sebba shows Ethel studying her way from a tenement childhood and unloving mother into an advanced junior high and arts-heavy Seward Park High School, where she acted and sang, her desired career.

Accepted to the prestigious Schola Cantorum chorus, she left after a year, perhaps because it went on tour and she couldn’t afford to quit working, Sebba says. Ethel would perform at labor rallies and helped lead a strike.

Julius studied electrical engineering at City College of New York, then a leftist student hotbed. His close friend Morton Sobell — who would be tried with the Rosenbergs and sentenced to 30 years — joined the Young Communist League. Julius became a political activist.

He met Ethel in 1936, when she was singing at a union benefit. They married after his graduation in 1939. In 1940, the Army hired him as a junior engineer.

Julius began giving information to the USSR and recruited friends, including Sobell, “involved in radar engineering,” Sebba says. In April 1945, Julius was fired for belonging to a union “allegedly controlled by the Communist Party.” He was hired by Emerson, maker of the proximity fuse, and provided a detonator to his Soviet handler.

They “did not see any contradiction in being loyal Americans while believing in Communist ideals,” Sebba says. But mainstream America soon thought otherwise.

In January 1950, the FBI interviewed David about Los Alamos uranium theft; Sebba says he’d stolen some. On June 16, he was arrested and soon charged with “conspiracy to commit espionage on behalf of the Soviet Union.” He confessed.

Julius was arrested the same day, Ethel on August 11 while leaving a grand jury appearance. She was charged with espionage, specifically two wartime conversations with Julius, David “and others.”

In prison, she agonized over their two young sons, placed in institutions.

Sebba’s account of the trial, including testimony, is persuasive that Ethel was unjustly convicted. (In 2008, Sobell told the New York Times that her guilt was “being Julius’ wife.”)

Sentenced, Ethel lived in solitary confinement; Julius was kept on death row. They met sitting at opposite ends of a long table, forbidden to touch, their conversation monitored.

After unsuccessful appeals, up to the Supreme Court and President Eisenhower, the two were killed by electrocution June 19, 1953.

Orphaned Michael, 10, and Robert, six, were adopted, loved and raised by a childless couple whose last names they took. They became successful professionals.

Ethel’s gravestone wishes her something that was missing much of her 37 years. After her name in Hebrew lettering are two smaller Hebrew letters with little marks above them indicating abbreviation. The letters are ayin and hay, for “may she rest in peace.”

‘United Against Antisemitism’ in Minnesota

Art in the atelier

Art in the atelier