Together with her husband, Harold, local philanthropist Mickey Smith generously supported a number of causes — both Jewish and non-Jewish — in the Twin Cities, across the United States, in Israel and around the world.

Smith’s legacy of giving started early. Her parents were founders of Hadassah and at the age of 15, she became a Hadassah Bud to help raise money for the organization.

“When we were first married, we gave modestly, and as our resources grew, we increased our giving,” Smith said in a 2007 Hadassah press release.

The couple’s major giving began more than 25 years ago when their daughter, Marjorie Smith Hofman, died of breast cancer at the age of 30.

“We made our first pledge to Hadassah of $250,000 for cancer research with the hope that Hadassah researchers would eradicate breast cancer,” she said. 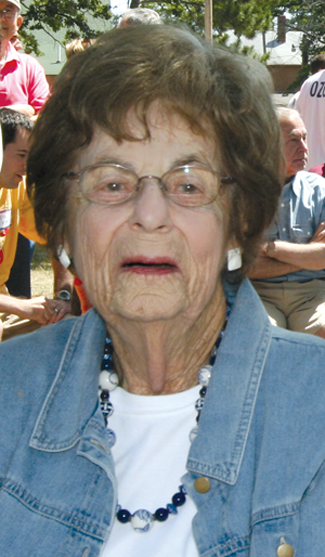 In 2007, the Smiths made a $1 million gift to the Wetsman Davidson Tower at Hadassah Medical Center in Jerusalem. She also established the Enhancement Center at the Sharett Institute of Oncology at Hadassah Hospital.

The Smiths’ children and grandchildren all support Hadassah through financial gifts and involvement in the organization. Their son, Jim, was national president of Hadassah Associates and all of the men in the family are associates.

Smith also became involved with Herzl Camp when their son was a camper and staff member in the 1960s. Jim Smith later served on the Herzl Camp board and as camp doctor. Smith’s grandchildren, David and Eve, were campers and David was also camp staff. Harold Smith also served as treasurer in the camp’s early years.

The Smiths recently reached a giving milestone: donating more than $1 million to Herzl Camp. In recognition of their long-standing support, Herzl Camp named its camp road “Mickey Smith Parkway” in 2010.

“All of us at Herzl Camp have been touched by Mickey’s care for Jewish community and children,” said a statement from camp staff that was provided to the AJW. “We will miss her humor, her generosity, her kindness and herÂ ruach [spirit].”

Smith and her husband also have been major donors to the Talmud Torah of St. Paul. The school’s building on Hamline Avenue bears the name of their late daughter.

“Mickey Smith’s devotion to the Jewish community is evident in the generosity she and her husband Harold showed throughout their lives,” Jon Parritz, United Jewish Fund and Council president, told the Jewish World. “Nowhere is this more apparent than in their leadership in supporting Jewish education and commitment to Talmud Torah of St Paul.”

Smith and her husband also established the Harold and Mickey Smith Gallery of Jewish Arts and Culture at the Minneapolis Institute of Arts. The gallery features religious and cultural objects of the Jewish people, and is one of only two encyclopedic art museums in the United States with a gallery dedicated to Jewish art and culture (the other is the North Carolina Museum of Art in Raleigh).

Corine Wegener is curator of the Harold and Mickey Smith Gallery and has worked with the Smiths since 1999.

“The gallery was an incredible contribution by the Smiths to the MIA and the Twin Cities community,” Wegener said.

Wegener explained that the Smiths created a special fund to be used for educational programming, in particular to pay for transportation of Jewish day school classes to visit the gallery.

“I always enjoyed going into the Smith gallery and just sitting on the bench with Mickey to listen as visitors discussed the collection, or docents brought school children through on tours,” Wegener said. “Mickey was a real inspiration to me as someone who used what she had in life to help others. She will certainly be missed.”

Smith was a graduate of the University of Minnesota with a degree in home economics. She was active in the American Sewing Guild and the American Home Economics Association.