“The complexity of the Israeli/Palestinian conflict should make it an ideal subject to teach critical thinking and how to have difficult discussions,” Stern says in The Conflict over the Conflict. “Instead, it is being used as a toxin that threatens the entire academic exercise.” 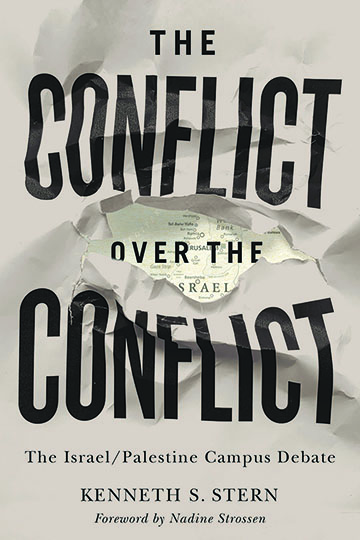 Stern, a lawyer and the director of the Bard Center for the Study of Hate, asks: “What is it about the Israel/Palestine conflict that makes people nuts?”

A short answer is that one side sees its existence threatened and the other sees an historical injustice.

“Many people who care about this conflict seem addicted to strong emotions and absolutist opinions, and allergic to reasoned discussion,” Stern says.

“If the other side is as detestable as if it were made up of Nazis, the logical conclusion is that you have to have nothing to do with it,” he says.

“To have a conversation with a student who has a diametrically opposed point of view becomes impossible, because you are conceding, by merely having the conversation, that their point of view might have the slightest bit of merit.”

But “campuses are for conversations, and it is hard to have a conversation if you have rules that define merely meeting… as a form of treachery.”

At its heart, Stern says, “this is still a battle over 1948 and the success of Zionism.”

Stern, a familiar name from his years at the American Jewish Committee, says that emotions often prevent clear thinking. Jews need to respond thoughtfully, not by reflex.

For example, trying to prevent the appearance of a hostile speaker can backfire. The college refusing to limit free speech and the uproar give the speaker free publicity and increase his or her audience.

Stern condemns shouting down of speakers and efforts to prevent students from having to deal with discomfort by trigger warnings and safe spaces. College students should face and converse about uncomfortable ideas so they learn to wrestle with challenging concepts. “There are no ‘trigger warnings’ after graduation.”

A college’s purpose is “to teach students how to think, not what to think” or not say so no one is offended, he says.

Jews are plenty offended by efforts to make it difficult or impossible for pro-Israel speakers to talk, and by insults, hateful propaganda and Israeli Apartheid Weeks.

But “if speech is to be suppressed, it can’t be based on the viewpoint of the speech expressed,” Stern says. Trying to deny platforms to vile speakers lets them “recast their vile message as noble protection of a right.”

The proper response, he says, is confronting lies, propaganda or hateful speech with facts.

When Iranian President Ahmadinejad was to speak at Columbia University in 2007, Stern says, President Lee Bollinger used his free speech right to first give a “hard-hitting talk,” challenging Ahmadinejad on Holocaust denial; calls for destroying Israel; support for terrorism; suppression of women, journalists and scholars; and persecution of gays.

Hateful speech should be opposed, “but legally it won’t work to seek its censorship,” says Stern, who explains that Title VI of the Civil Rights Act “does not, and should not, prohibit antisemitic expressions.” But “campuses should make sure that none of their students… is the victim of pervasive intimidation or harassment. That’s quite different from protecting them from hearing unpleasant, and even bigoted, ideas.”

The chapter on the Antisemitism Awareness Act reads like a necessary but tedious legal brief, differentiating between anti-Semitic speech and violations of law.

Clarifications: Stern incorrectly names the 1936-37 Royal Commission of Inquiry to Palestine, headed by Lord Robert Peel. Arabs rejected its proposal for Arab and Jewish partition. The April 1948 “horrid murder of Jewish doctors and nurses at Mt. Scopus” did not occur there; a convoy of doctors and nurses driving up to Hadassah Hospital on Mt. Scopus was ambushed in Jerusalem’s Sheikh Jarrah neighborhood, killing 78 Jews.

Student voices tend to appear in group statements or Stern’s summaries. Conflict could have been enlivened by interviewing and quoting students about their experiences and feelings.

Stern offers suggestions for improvement, one of them being to teach Israeli and Palestinian histories together, exposing students to both sides in the same classroom. Another is assigning students to research and argue the side they don’t support.

In praise of George Soros