British, Greek, Cypriot planes join battle to contain brush fire in northern Israel, which has been raging out of control since Thursday

Firefighters from abroad have joined in Israelis in attempts to contain the largest wildire in the nation’s history. Haaretz reported today that police warned local residents who had returned to their homes in the north that they would evacuate them by force. 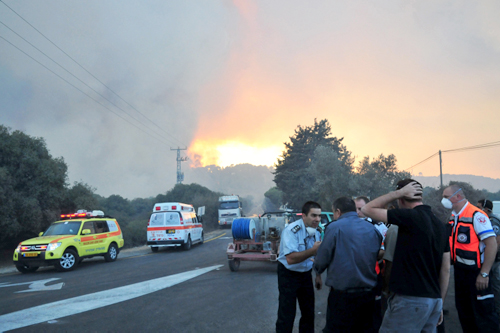 At least 40 Israelis have been killed in a forest fire in northern Israel described as out of control on Thursday. (Photo: Flash90/JTA)

The blaze has been searing its way through a large area of northern Israel since Thursday morning, spreading as far the moshav of Nir Etzion by Friday afternoon.

Over 15,000 Northern residents, including 600 prison inmates, were evacuated as the blaze raged out of control, devastating hundreds of acres of pine forest before sweeping down the slopes of the Carmel hills towards Haifa, Israel’s third largest city.

Fire-fighting aircraft from Britain, Greece and Cyprus landed in Israel earlier Friday, the first arrivals of a planned international aid drive to battle the massive brushfire.

The death toll from the blaze reached 41 on Friday, most from an incident involving a bus carrying members of a Prison Service guards’ course who were heading to the Damon jail to help evacuate inmates there.

When a fallen tree blocked a road, their bus was trapped in the flames, killing as many as 36 passengers, as well as others who had attempted to rescue them.

By mid-evening Thursday, fire chiefs admitted that they had no control of the fire, believed to have started in an illegal landfill site.

As the flames neared the city limits, residents of Denya, an affluent district of Haifa — a busy port city and the north’s economic heartland — were moved to safety.

At around 4:00 A.M., local time, firefighters warned of the possibility the blaze would reach Highway 4, a major traffic artery linking the north with Tel Aviv, with those predictions proving true later in the morning.

At around 10:30 A.M. on Friday morning the fire had swept its way further to the coastal Highway 2, forcing police to close one of Israel’s busiest roads between Zichron Yaakov and Haifa.

The blaze advanced toward moshav Nir Etzion, south of Haifa, around noon on Friday. Several residents returned to the moshav overnight after police ordered its evacuation on Thursday.

Police officials are now calling those residents to vacate their homes again, fearing the approaching flames could pose a serious risk to their lives.

The convoy of internationalÂ aircraft arriving to fight the fire included a Bulgarian aircraft, carrying 100 Bulgarian fire fighters and accompanied by the country’s deputy foreign minister, Haaretz reported. Also, GreeceÂ sent four fire-fighting planes, Cyprus and Azerbaijan also sent aircraft. Haaretz noted that two Turkish aircraft were expected to land at the Ramat David Israel Air Force base on Friday morning.
“Other countries sending aid to arrive at Israel later Friday support included Egypt, Jordan, France, Croatia, Russia, Spain, and Romania,” the newspaper reported. “Overall, 20 fire-fighting planes are expected to arrive in Israel, with New York’s fire department also agreeing to send an airplane.”
The Associated Press said that Israeli authorities “raised the possibility of arson, saying several small fires that broke out in the same general area but were quickly contained appeared to have been deliberately set….Â Police said two men, Druze from northern Israel, had been detained on suspicion they planned to set a smaller fire. A bicycle and a wig were found near another blaze site. That reinforced suspicions that the big blaze was set by arsonists.”
Israeli Prime Minister Benjamin Netanyahu called the fire an “unprecedented disaster.”
JTA reported:

“We have known difficult moments and, naturally, we will need to learn very many lessons in order to deal with disasters of this kind,” he said. “But right now all of our efforts are directed to saving lives and also watching over the lives of the forces dealing with the disaster.”

Netanyahu said he would declare a national day of mourning when the fire is extinguished and there is time to mourn.

“A horrible disaster has fallen upon us,” he said. “I shall declare it a national day of mourning, but right now we haven’t the time to mourn and investigate.”

Rambam Hospital, which is the largest medical center in northern Israel, posted this video: