Fire in a death camp

About 25 percent of the death camp of Majdanek remained intact, and became a memorial to those murdered there and throughout Europe during the Holocaust

My mother-in-law once told me a story of how, when she was a young woman, she took a riverboat ride from her home in Warsaw to visit relatives who lived in a town not far from the city of Lublin. It was a terrifying trip, memorable because throughout the journey she was “treated” to an ongoing discussion among a group of Poles regarding how much fun it might be to throw the Jewish girl overboard. She had a wide, extended family spread out over many different towns and cities in Poland; many of her mother’s relatives lived in the area around Lublin. None survived.

The city of Lublin, itself, was home to a renowned yeshiva and about 40,000 Jews. But a few years after my mother-in-law left Poland, like a cancerous growth, a camp grew on the outskirts of that city, a death camp named Majdanek. While she never found out how any of the members of her family met their deaths, it’s fairly certain that some, if not all, of the people whom she visited as a young woman were murdered in Majdanek.

In March 2004, our family traveled to Poland to see and feel those places where my husband’s parents grew up and lived, and where their brothers and sisters, uncles, aunts and cousins died at the hands of the Nazis. One of the places we visited was Majdanek.

Auschwitz and Treblinka were more or less razed to the ground, but about 25 percent of the death camp of Majdanek remained intact, and became a memorial to those murdered there and throughout Europe during the Holocaust. It’s impossible to adequately describe how one feels upon entering an innocuous-looking wooden building and viewing shower heads through which Zyklon B gas once spewed, burning out the lungs of screaming and weeping men, women and children, or to view the crematoria in which their bodies, still warm (and occasionally still alive) were burned. Not far from the crematoria stood a dump site turned memorial, a huge pile of ashes now surrounded by a wall and covered with a domed roof, the remains of thousands upon thousands of victims massacred at Majdanek. I stood at the edge of this memorial and said the Kaddish softly to myself. 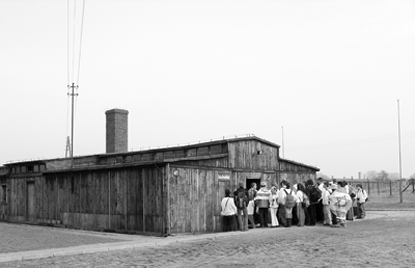 A group of young Israelis gather at Building 41, one of the gas chambers at Majdanek. (Photo: Courtesy of Judy Git)

Then there were the barracks restored to how they were at various times during the history of the death camp. At its onset, the barracks offered nothing but a roof and walls. Prisoners slept on the cold ground; but as the population increased, shelves were built in the barracks and prisoners were stacked like so much merchandise, layer upon layer.

One of the barracks held row upon row of wire containers, most of them ceiling to floor, filled with shoes which stood mute witness to the atrocities committed against the victims on whose feet they were once worn. One news article claims that there were 10,000 shoes stored there, but to me that seems to be a vast underestimation; for me it’s impossible even to imagine how many shoes were in that building. The vast majority of these shoes had lost all semblance of color and were a uniform shade of gray; but in one container, like the red dress in Steven Spielberg’s film Schindler’s List, like a mute witness declaring “J’accuse,” one red shoe stood out.

In August, Majdanek burned. The barracks full of shoes was specifically mentioned as having burned; to what extent, if any, the rest of the camp was affected is unclear to me, but even if the shoe barracks was the only building affected, now the only memory remaining of that one red shoe is that captured in photographs taken before the fire.

In the wind following the fire, some ashes from the burnt shoes must have settled among the ashes of those who once wore them.