Embracing the richness of Jewish music

Larry Gibson has always believed that Jewish involvement in music — either by composing or performing — was not an accident.

“We didn’t do sculpture and we didn’t do painting because of the images of God,” Gibson told the AJW. “Music always has been important, and it’s a very rich and varied set of music.”

From Ladino and Yiddish to sacred and contemporary, the varied tradition of Jewish music will be presented and explored by the new Twin Cities Jewish Chorale. The chorale, a 501(c)3 organization, is the only four-part mixed choir in the area to perform the full range of Jewish music.

The chorale will host its inaugural concert on June 6 at the Sabes JCC. The concert will be a sampler of Jewish music over 400 years, beginning with the Renaissance, sung in English, Hebrew, Yiddish and Ladino. 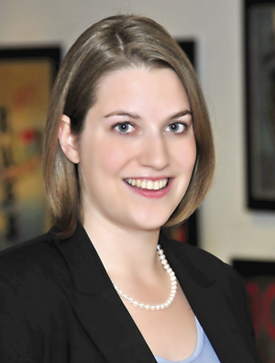 Sara Cowan: I’m drawn to the act of making music together with a group of people and music as a community-building effort. (Photo: Courtesy of the Twin Cities Jewish Chorale)

The chorale has 30 members who come from diverse backgrounds and musical ability. Gibson, for example, is 83 years old and describes his music experience as “very limited,” singing in high school and synagogue choirs. On the other hand, member Judi Lamble sang for eight years with the Chicago Symphony Chorus, is a composer of Jewish music and sings regularly at Temple Israel.

“We’re a true community-based chorale, so you don’t have to be affiliated with a synagogue,” Lamble said. “We want to combine that Minnesota artistic excellence in choral music with Jewish choral music.”

Lamble, a lawyer, is chair of the chorale’s board of directors, of which Gibson is also a member. Under Lamble’s leadership, the board of directors works to maintain the logistics of the organization — including fundraising and sustainability through grants and donations, scheduling and recruitment.

“Mostly, I’m the person who makes the to-do list,” Lamble said. “It’s been an exciting ride so far.”

The chorale also supports an advisory board, comprised of local cantors, synagogue choir directors and other artistic leaders.

The chorale is led by Artistic Director Sara Cowan, a native of Omaha, Neb., who recently received her master’s degree in choral conducting from the University of Minnesota. Cowan, who also teaches religious school at Temple Israel, said she is excited to bring together her expertise in conducting with her Jewish culture.

“I’m drawn to the act of making music together with a group of people and music as a community-building effort,” Cowan said. “I think we are unique in that we are the first community chorus to really focus ourselves on all aspects of the Jewish faith and Jewish music and Jewish traditions.”

Lynette Eastwold, the organist and pianist at Adath Jeshurun Congregation, serves as accompanist for the Twin Cities Jewish Chorale. She was asked to be a part of the group from its inception in late 2009.

“People are so thrilled to be able to be together and sing, so I was really in favor of the possibility of there being a community-wide choir like that,” she said. “I think that’s the huge plus of it, because it’s inclusive and open to anybody who is willing to come and rehearse and do their best and learn the music.”

Chorale members pay dues, but scholarships are available, and rehearsals take place on Wednesday nights at the Sabes JCC in St. Louis Park. Local composers of Jewish music are also invited to submit their work.

“We make, I believe, a wonderful sound that a small group simply isn’t capable of,” Gibson said. “It’s just great fun to sing in these extraordinarily different modes. I love it.”

The Twin Cities Jewish Chorale will perform its inaugural concert 3 p.m. Sunday, June 6 in the auditorium at the Sabes JCC, 4330 Cedar Lake Rd. S., St. Louis Park. Tickets are $10, or $5 for seniors and students; they can be purchased at: twincitiesjewishchorale.org or at the door. For information, call 612-644-2348.