The American VOICE of the Soviet Jews collects, preserves memories of local Jewish immigrants from the former Soviet Union and their experiences during World War II

When Adolf Hitler attacked the Union of Soviet Socialist Republics (USSR) on June 22, 1941, without a declaration of war, the USSR’s total losses — including troops and civilians — numbered more than 20 million people. But, according to the new film from director Igor Dadashev, “that was the price of victory over Nazism.”

Together with his brother Kamil, the film’s producer, Igor has createdÂ The American VOICE of the Soviet Jews, a feature-length documentary that collects and preserves the memories of local Jewish immigrants from the former Soviet Union. Those featured in the film are participants in the VOICE Community Building Initiative, a collaboration between the Sabes JCC, Jewish Community Action (JCA) and the Minneapolis Jewish Federation that engages and connects the Russian-speaking Jewish elderly community in the Loring Park neighborhood of Minneapolis.

While the film includes the stories of the participants’ childhoods, schooling and professional lives, the majority of memories come from their experiences during the Holocaust and in service in Joseph Stalin’s army during World War II.

The film will premiere on June 8 at the Minnesota History Center. The screening will be preceded by a gallery tour of the exhibitÂ Minnesota’s Greatest Generation: The Depression, the War, the Boom, and Igor and Kamil will speak after the film. 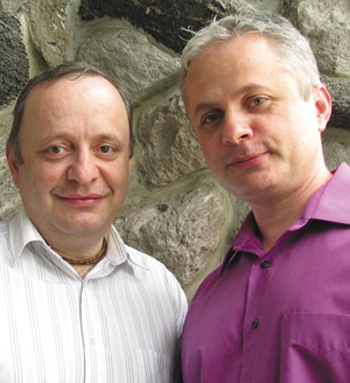 Brothers Igor (left) and Kamil Dadashev have created a film about the experience of Soviet Jews in World War II, some of whom are now living in Minneapolis. (Photo: Mordecai Specktor)

“The idea is not to just to tell the stories, but also to make the parallels between their generation and the present generation, especially now that the United States is at war overseas,” Kamil said.

Lyudmyla Petrenko, VOICE’s community organizer, first proposed the project, which took nine months to complete. When she learned about Igor’s filmmaking experience, she asked the brothers to begin covering VOICE events for the program’s promotional videos.

“Along the way, we’d been thinking that it would be nice to produce something more monumental,” Kamil said. “And that’s when [Petrenko] said, ‘Believe it or not, the majority of our participants are actually World War II veterans.’ That’s when we thought we could kill two birds with one stone, pretty much. We can [educate] the whole Jewish community about elders… as well as share their life stories and experiences that many American Jews are not familiar with.”

Igor and Kamil gathered about 24 hours of footage, which had to be edited into the 60-minute documentary. Historical photos and film footage are also used, as are English subtitles.

The brothers interviewed 18 participants — 10 from Booth Manor and 8 from the Heartland Adult Day Care Center — and all are included in the final film.

Among those interviewed in the film are Vladimir Posse, who marched in the 1945 victory parade in Moscow’s Red Square; Georgiy and Yelena Semashko, and Evgeniya Merlis, who lived through the UkrainianÂ golodomor (famine); and Mera Sokolinskaya and Maria Reznik, who experienced Hitler’s siege of Leningrad — along with the starvation, cannibalism and human degradation it caused.

The participants had an opportunity to see the film at a private screening on March 24.

“What a simple movie, how uncomplicated,” Posse said. “Everything comes from the depth of the heart, depth of the soul. I was impressed, amazed by this genuine film.”

The Dadashev brothers are natives of Baku, Azerbaijan, a former Soviet republic, from where Kamil immigrated to the United States in 1994. Igor emigrated to Magadan, USSR, in 1989, and joined his brother and parents in the U.S. just last year.

Igor, who is also a guitarist, singer and composer — and contributed original music to the film — has also volunteered to perform for the residents at Booth Manor.

“I’m really proud of Igor’s accomplishment, as a volunteer and, second of all, as an engaging member of the community. He produced this film that is going to truly become an integral and an eternal part of… the family archives of these elders and this community,” Kamil said.

A 10-minute version of the film was shown on St. Louis Park’s cable access channel, and was included in the Minneapolis Jewish Film Festival Shorts Competition titled “Profiling: Exploring the Diversity of the Jewish Community in Ten Minutes or Less!”

Still photographs of the film’s participants, taken by Kamil, are also featured in the current exhibit at the Tychman Shapiro Gallery titledÂ Profiling: Exploring the Faces of Diversity within the Jewish Community.

While many films have been made about World War II, Kamil said it’s important to document as many memories before that generation passes away. In fact, one of the film’s participants, Georgiy Semashko, died in April.

“We cannot afford not to record those stories, not to commemorate those people,” he said.

“It’s a great history, it’s our tribute to a great generation,” Igor added. “We should not forget their heroism.”

The American VOICE of the Soviet Jews will be screened 7 p.m. Tuesday, June 8 at the Minnesota History Center, 345 Kellogg Blvd. W., St. Paul. The screening will be preceded by a gallery tour of the exhibitÂ Minnesota’s Greatest Generation: The Depression, the War, the Boom at 6 p.m. Igor and Kamil Dadashev will speak after the film.

The event is free and open to the public, and is part of the Minnesota History Center’s History Lounge series. The event is co-sponsored by VOICE Community Building Initiative, Jewish Community Action, Sabes JCC, St. Paul JCC, Jewish Historical Society of the Upper Midwest and the Minneapolis Jewish Federation.

For information on the VOICE program, contact Lyudmyla Petrenko at 952-381-3479 or: lpetrenko@sabesjcc.org.