In September 2008, journalist Jay Weiner had just returned to the United States from covering the Summer Olympics in Beijing, China, when MinnPost.com, the Twin Cities-based news Web site for which he had been working, asked if he would write some preelection stories.

“The only politics I had really covered was stadium politics,” Weiner told the Jewish World. “I had been over at the Capitol for a number of sessions to follow [Minnesota] Twins ballpark stuff, but I had never covered a campaign of any sort.”

Weiner worked at the Star Tribune for 27 years, covering off-the-field sports business issues since 1993. He described his 2000 book,Â Stadium Games: Fifty Years of Big League Greed and Bush League Boondoggles (University of Minnesota Press), as a “political history of the Twin Cities through the prism of professional sports.” He has also covered every Olympic Games since 1984.

He took a buyout from the Star Tribune in June 2007 and soon began writing for MinnPost. After Election Day 2008, the editors at MinnPost asked if Weiner would “help out” with covering the recount of the Senate race between incumbent Sen. Norm Coleman and DFL challenger Al Franken.

“Everybody thought it would just take a couple of weeks,” Weiner recalled. “That then led to following it every day for the next eight months. So I kind of tumbled into the recount coverage, I would say, and it was in the midst of that that the notion of a book was presented to me.” 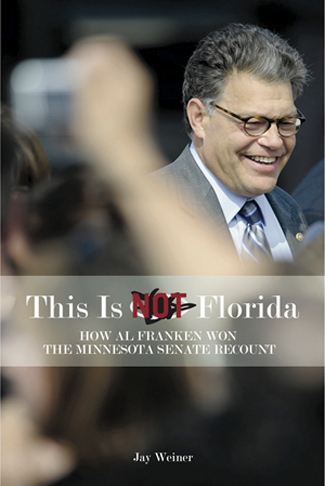 This Is Not Florida by Jay Weiner is now available from University of Minnesota Press.

(Editor’s note: Jay Weiner covered the 2008 Senate recount for MinnPost.com, the CEO and editor of which is Joel Kramer. In the interest of full disclosure, Kramer is also the chairman of the board of and a partner in Minnesota Jewish Media, LLC, the parent company of the American Jewish World.)

Weiner has writtenÂ This Is Not Florida: How Al Franken Won the Minnesota Senate Recount (University of Minnesota Press), a “behind-the-scenes story” taken from Weiner’s coverage of nearly every news conference, state Canvassing Board hearing and trial from Nov. 12, 2008, until Franken was sworn in as Minnesota’s junior U.S. senator on July 7, 2009.

For his coverage of the recount — the largest, longest and most expensive election recount in American history — Weiner was awarded Minnesota’s prestigious Frank Premack Public Affairs Journalism Award.

Aside from one chapter that flashes back to the campaign, the book is a chronological account of the statewide recount. Weiner interviewed “just about every major player,” except for Coleman and Ben Ginsberg, Coleman’s Washington, D.C.-based chief legal spokesman during the election contest trial. According to the book, Weiner attempted to interview Coleman “through two intermediaries on four different occasions and in one lengthy letter delivered to his home.” Coleman did not respond.

“My goal was to really tell a story, to tell the tale, the saga as it were,” Weiner said. “I just wanted to tell the story in as comprehensive a way as possible… As I wrote it, and I wrote it relatively fast, it kept getting shorter because I wanted to make sure it was readable.”

Though his book is obviously of interest to political scientists and election junkies, Weiner has crafted a fascinating page-turner for anyone interested in this recount. With incredible attention to detail, Weiner presents a distinct “cast of characters” whose unique personalities shine in both dialogue and narrative.

As an example, his extensive interviews — conducted throughout the Twin Cities and in Washington, D.C., and Seattle — allowed Weiner to paint a scene of where various figures were on Election Night, such as Marc Elias, the Washington, D.C.-based lawyer and “quarterback” of Franken’s recount legal team, who “wandered back and forth” in his office at the Mott House, the home of the Democratic Senatorial Campaign Committee.

“This war room was one of his two Washington law offices, but this one was his own private heaven,” Weiner writes. “With relatively unadorned walls, it appeared temporary, which it was not. Its shelves were furnished with dusty three-ring binders filled with scintillating advisory opinions from the Federal Election Commission. A George W. Bush anxiety doll sat on his desk for squeezing. Staring down at Elias was a New York Giants football jersey with the number 20 on it. Atop the number is the name ELIAS, for Keith Elias, a not-very-good running back — a Princeton grad, for gosh sakes — but an Elias who was a Giant nonetheless.” 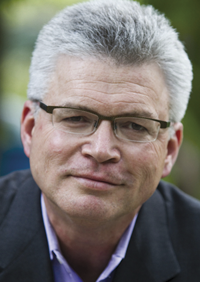 Weiner said his eyes have always been open to those little details due to his background as a sportswriter.

“Because I was bringing these, what I would view as, fresh eyes to the whole political process, maybe I was seeing some things that more seasoned political reporters didn’t see,” he said.

Weiner said he intended for his book to address four main points about the Franken-Coleman recount: a general understanding of the democratic process and how it works; the fact that Minnesota has a “pretty good system”; the realization that recounts take a long time to be conducted appropriately; and the opportunity to showcase “neat personalities” who came together for this process.

Only two years after the Franken–Coleman recount began, these four points are once again brought to the forefront as Minnesota prepares for the statewide recount of the 2010 race for governor between Republican Tom Emmer and DFLer Mark Dayton.

According to the unofficial election results listed on the Web site of the Minnesota Secretary of State’s office, which have not yet been certified by the state Canvassing Board, Dayton currently leads the race by about 8,700 votes. In the 2008 Senate race, Coleman led Franken by 215 votes (out of some 2.9 million votes cast) before the recount.

“There is no doubt that the Republicans in the 2010 recount are reading off of the playbook of the Democrats in 2008,” Weiner said. “The Emmer recount effort is far more robust than the Coleman recount effort was. The big difference is that Emmer is behind and Coleman was ahead, at least by a little bit in 2008. Some people, I have heard, are using my book as a template for other recounts. Not that I wrote the template, but in my reporting of how the Franken side did it in 2008, there are other people here and around the country from both parties who are saying, ‘Hey, look at what Franken did, look at what the Franken legal and data team did to help him win the election and recount.’”

Weiner is covering the Dayton–Emmer recount for MinnPost, and some of the players will be familiar.

According to Weiner, the spirit, anger and energy of the 2008 Senate campaign was a result of Sen. Paul Wellstone’s death in 2002, which happened just before the election, ultimately seating Coleman in Washington. The effects of the 2008 recount, Weiner said, will still be felt in 2014 when Franken runs for reelection.

“Republicans have really cranked up their recount machinery to make sure, in their view, that 2008 won’t happen again in the same way that the Democrats, I write, kind of cranked up the Franken recount effort so thatÂ Bush v. Gore in Florida wouldn’t happen again,” Weiner said. “There’s a continuum here and I think we will see it in 2014. That campaign is just going to be really, really something, and it will all trace back to this recount.”

Below is a book trailer for Weiner’s This Is Not Florida: