(Editor’s note: This story from JTA arrived too late for inclusion in our Aug. 6 print edition.)

NEW YORK (JTA) — Is it possible that the first iconic Jewish picture of the decade is of an interfaith marriage?

Photographs taken July 31 show the Jewish groom wearing a yarmulke and a crumpled tallit staring into the eyes of his giddy bride under a traditional Jewish wedding canopy with a framed ketuba, a Jewish wedding contract, in the background.

The couple is Marc Mezvinsky, the banker son of two Jewish ex-Congress members, and Chelsea Clinton, the daughter of the former U.S. president and current secretary of state.

The images and scant details of the tightly guarded wedding — dubbed by some the “wedding of the century” — have raised a number of questions about the significance of the union for American Jews and what it says about intermarriage in America. 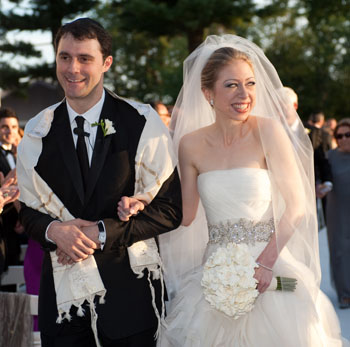 We should “celebrate the full acceptance of Jews by the larger society that this marriage represents,” Hebrew Union College sociologist Steven Cohen told JTA via e-mail from Jerusalem.

At the same time, he noted, the fact that so few children of interfaith unions, particularly those between Jewish fathers and non-Jewish mothers, are raised solely as Jews raises the conundrum of our age: “How do we Jewishly engage and educate the intermarried, while at the same time maintaining our time-honored commitment to inmarriage?” Cohen asked. “In short, we should celebrate the particular marriage of these two fine individuals, but we ought not celebrate the type of marriage it constitutes and represents.”

The wedding had more than just a Jewish flair.

It was officiated by a rabbi, James Ponet, head of the Joseph Slifka Center for Jewish Life at Yale University, along with a Methodist minister. The marriage took place under a chupa. Friends of the couple recited the traditional sheva brachot, the seven traditional Jewish blessings given to the bride and groom. The groom broke a glass with his foot, as is tradition. And according to several reports, guests danced the hora and lifted the former president and the secretary of state, Bill and Hillary Clinton, in chairs during the dance.

Yet some of the more liberal streams of American Judaism, which accept intermarriage if the couple’s children are raised as Jews, chafed at the fact that the wedding took place on Saturday, before the Jewish Sabbath ended. The Reform movement frowns upon its rabbis conducting weddings on the Sabbath, the president of the Union for Reform Judaism, Rabbi Eric Yoffie, told JTA.

In 1973, the Reform movement decided officially that its rabbis would be allowed to perform intermarriages, though they would be discouraged from doing so, an edict that still stands today, he said.

“She has married in,” Paul Golin, the associate director of the Jewish Outreach Institute, a nondenominational group that reaches out to unaffiliated and intermarried families, said of Clinton. “Some will say he married out, but if he was marrying out, there wouldn’t have been anything Jewish.

“The fact that they went to the effort to have a chupa and have a rabbi and that he wore a tallis says a lot about their future direction,” Golin added. “Otherwise, why bother?”

The marriage has pushed the internal Jewish community debate about intermarriage into the view of mainstream America.

In the days before the wedding, the Washington Post asked several rabbis in its “On Faith” column, “Is interfaith marriage good for American society? Is it good for religion? What is lost — and gained — when religious people intermarry?”

Rabbi Steven Wernick, the CEO of the United Synagogue of Conservative Judaism, said intermarriage is certainly “not ideal,” but that the Conservative movement in 2008 decided that it must welcome interfaith families and “help their spouses along their spiritual journeys.”

Rabbi Shmuley Hecht, who is Orthodox and the rabbinical adviser at Yale University’s Eliezer Jewish Society, said intermarriage can work only if the non-Jewish spouse converts to Judaism through an Orthodox conversion and genuinely changes religions. Otherwise, he said, the marriage is doomed to fail because down the road any self-aware Jew, “however defined, will feel the call of their people and have the fullness of their being disrupted by intermarriage.”

Rabbi Brad Hirschfield, also Orthodox and president of the National Jewish Center for Learning and Leadership, said that when marriages break down it usually has little to do with religion. All religions should stop worrying about intermarriage and start worrying about how to help couples make their relationships work, he wrote.

Ed Case, the executive director of Interfaithfamily.com, said the Clinton wedding certainly had stirred interest in intermarriage, noting that traffic to his Web site was up 35 percent in July compared to the same month last year. Case said that accepting this marriage and welcoming this intermarried family into the Jewish fold could help pave the way for the Jewish community to be more accepting of others.

Golin said he is skeptical that the Clinton-Mezvinsky wedding does anything more than revive existing battle lines in the Jewish debate over intermarriage.

“The horse is so far out of the barn on this one,” Golin said, noting that as an intermarried person himself, he is turned off by much of the debate over intermarriage as a problem. “The folks who are fearful that my kind of Judaism is going to destroy Judaism are still going to be fearful. The folks who are fully embracing of interfaith families are going to be embracing. I don’t see a whole lot of movement.”

The Mezvinsky-Clinton wedding is affirmation both of the success of the Jewish community and that American Jewry must learn how to deal with intermarried families and figure out how to bring them into the Jewish fold, the Reform movement’s Yoffie said.

“The price of our reaffirmation in American society is a high rate of intermarriage,” he said. “We can’t be embraced and not expect that our young people won’t be marrying with their young people. Unless we are prepared to withdraw into a ghetto, there is no solution.”

“I look at the couple and my response is, ‘I hope they will make a choice to raise their children in a single religion and tradition, and second, as a Jew and rabbi, I hope it will be Judaism,” Yoffie added. “I don’t know if they have had that conversation.”