Proceeds will support the only Jewish hospice in the Upper Midwest

By JOSH LIEBERTHAL
Sholom Community Alliance’s Johnson Hospice Care Agency (JHCA) will hold its second annual “Remember and Release Butterfly Event” on Sunday Aug. 8 at Sholom Home West in St. Louis Park. The event is intended to honor the individuals who receive hospice care, with each butterfly representing the cycle of life, birth, transition, healing and renewal.
One hundred people attended the inaugural event last August, which was held in Heidi’s Garden at the Richard and Rossy Shaller Family Campus in St. Paul (9-4-09 AJW).
All proceeds from the Butterfly Release benefit JHCA, a fully Medicare-licensed hospice agency providing end-of-life care to patients wherever they live — including private homes, assisted living facilities and nursing homes — with specialized services provided for Jewish patients and their families (10-16-09 AJW).
Rabbi Shalom Reznik-Bell is JHCA’s chaplain, and provides spiritual and emotional support to patients of all faiths and their families.
“Jewish hospice is hospice in a Jewish idiom and it is hospice that is explicitly based upon Jewish values and principles that are at the same time appropriate for people of all faiths that may want to enter Johnson Hospice,” Reznik-Bell told the AJW.
Hospice is a concept of care that is directed by the patient’s primary care doctor and delivered in an interdisciplinary team approach by nurses, social workers, hospice aides, chaplains, music therapists and volunteers. JHCA is the only Jewish hospice agency in the Twin Cities as well as the entire Upper Midwest, and combines ancient tradition with modern tools to provide spiritual support for individuals as they face end-of-life concerns. 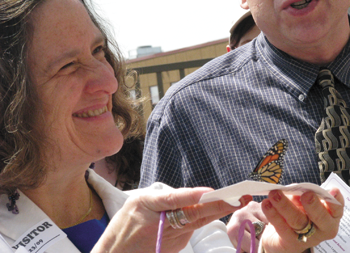 Rabbi Amy Eilberg reacted with delight as her butterfly hesitated before taking flight at the 2009 butterfly release. (Photo: Mordecai Specktor)

Hospice can ease the stress for the patient by coming to them instead of transporting the patient to an entirely different facility. However, patients and their families can also receive hospice care at Sholom’s Shaller Family Campus in St. Paul, where a designated JHCA floor includes a chapel, dining room, library, and spacious private suites for patients and their families.
Ellen Jackson’s mother, Edith Smith, spent about six months on the JHCA floor in St. Paul, prior to her death earlier this year.
“On the wing of that floor where my mom was, they were all end-of-life patients; so the staff understood that their main goal was for them to be comfortable and have their pain managed. The staff understood that and that each person’s care was going to be a bit different,” Jackson said. “They are so sensitive to the patient’s and the family’s needs, I just can’t tell you how grateful we are to them.”
During her time there, Smith formed special connections with the people who provided her care. Hospice nurse Micki Beattie visited Smith at least once or twice a week and e-mailed Jackson with updates on her mother’s condition, which Jackson said was “really good for my spirits.”
Jackson and the nurse are still friends and continue to keep in touch.
Another one of Smith’s relationships was with her hospice volunteer, Viviana Ortelli-Szleifer, who, in addition to being Smith’s companion, kept in constant contact with Jackson and her sister — calling just to chat and make them feel better about Smith’s care.
“She would do her nails or hold her hand or just go sit in the sun with her,” Jackson said of Ortelli-Szleifer, who visited Smith each Saturday.
Ortelli-Szleifer was moved to write about her relationship with Smith and described their time together as “No words, just being.”
“I do not know who she was before I met her, but who she is for me is pure selflessness, one of God’s best creations,” Ortelli-Szleifer wrote a few days before Smith died. Ortelli-Szleifer recently made aliya and plans to become a hospice volunteer in Israel.
Medicare requires that five percent of the hospice care involvement be fulfilled by volunteers like Ortelli-Szleifer, who must undergo a 16-hour training session. Since it began in October 2008, JHCA has trained 50 volunteers.
Hospice volunteers help in very specific ways. As an example, one patient’s hospice experience was made more comfortable for him because he was paired with a fluent Hebrew-speaking volunteer.
According to Rabbi Reznik-Bell, hospice is about being compassionate and kind, and alleviating any pain — physical, emotional or spiritual — at the end of life.
“Certainly there is an emphasis upon helping clients to choose life,” he said, “mainly to live as fully as possible until they enter eternity.”