Some thought that Iran’s Supreme Leader Ayatollah Ali Khamenei would strike a conciliatory note when he spoke during Friday prayers at Tehran University today. Not so. 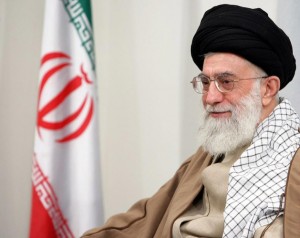 Khamenei: “Media belonging to the Zionists” is to blame.

JTA reports that Khamenei “denied that the country’s recent elections were fixed, called on protesters to stop and blamed the ‘Zionist’ media.”
The report continues:

In his first public address since the June 12 elections, Iran’s highest ranking political and religious authority accused the opposition of “challenging democracy after the elections.”

Khamenei delivered a nearly two-hour sermon during Friday prayers at Tehran University, reportedly attended by tens of thousands of worshipers. He called on the opposition to take their protests off of the streets and to instead use legal channels to register their complaints about Mahmoud Ahmadinejad’s victory….Â Khamenei blamed the “media belonging to Zionists, evil media” for fomenting the demonstrations.

He also warned that if street demonstrations don’t end, then “leading politicians will be held accountable for the chaos.”

Hundreds of thousands of protestors again on Thursday night demonstrated in the streets of Tehran, the sixth day of ever-increasing protests in the Islamic Republic’s capital.

Your Jewish Questions: Where does G-d live?