The end of the Israeli-Palestinian conflict will happen as a result of the everyday efforts of ordinary people, not the proclamations of politicians, filmmakers Ronit Avni and Julia Bacha are convinced.

Encounter Point, their powerhouse 2006 documentary, focused on Jews and Arabs who’d lost loved ones to violence yet were committed to forgiveness and peace. The duo’s new film,Â Budrus, spotlights a Palestinian man who forged alliances between local Fatah and Hamas followers to organize an ongoing protest — joined by dozens of Israelis — to stop the construction of the separation barrier on the titular village’s land.

Budrus opens Nov. 26 at the Lagoon Cinema in Minneapolis.

“The film came about very much in response to a curiosity and a desire expressed in the Jewish community in the West, in America, in Israel, where people were asking where is the Palestinian nonviolence movement,” Avni explained in an interview afterÂ Budrus screened in the San Francisco International Film Festival in May.

“Often the phrase that followed the question was something along the lines of ‘If only Palestinians adopted nonviolence, there would be peace,’” Avni related. “The film explores what it looks like when a Palestinian nonviolence movement emerges. And what is the Israeli response. If there are difficult moments in the film, we hope that that raises a discussion about what we in the international community can do to support truly nonviolent methods to resolve the conflict.” 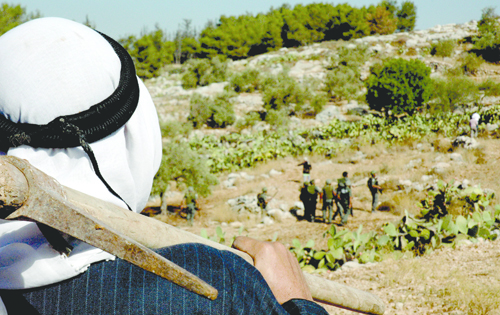 A Palestinian farmer in Budrus watches a group of Israeli soldiers. (Photo: Courtesy of Just Vision)

Bacha and Avni collected and organized vérité footage shot by numerous professionals and amateurs in Budrus, from the beginning of the separation barrier’s construction, in 2003, through last year. Interestingly, and intentionally, they leave the film’s ending date vague for viewers.

“Budrus is happening today in other villages,” Avni says, “so we didn’t want people to think that the events chronicled in the film were of another era and aren’t relevant today.”

Avni, who was born in Canada and also holds Israeli and (more recently) American citizenship, and Bacha (who is not Jewish) see themselves as more than filmmakers. They founded the Washington, D.C.- and Jerusalem-based organization Just Vision not just to funnel financial support for their documentaries, but to provide organized outreach and ongoing influence in support of those working for nonviolent resolution of the conflict.

“Media plays a critical role in exposing or obscuring the contribution that civil society has made and can make on this issue,” Avni declares. “There has been a disproportionate coverage of militancy and militarism compared to communities and individuals trying to problem-solve.” 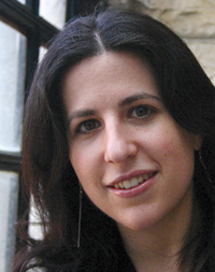 In a sound-bite world, newscasts will always make room for shooting and shouting. But they can’t compress a long-term process into a 60-second segment.

“It’s much harder to tell stories about slow, bottom-up change,” Avni says. “I think documentary film is uniquely positioned to tell those kinds of stories. They complement other forms of media coverage, and that’s where our contribution lies.”

Budrus screened at the Dubai, Berlin and Tribeca film festivals, and received Oscar qualifying runs in Los Angeles and New York this summer.

A liberal Jew, Avni is acutely aware of and sensitive to the attitudes of a segment of the American Jewish community vis-Ã¨-vis the Palestinians.

“I don’t think the subject in our film questions Israeli concerns about security,” she says. “So audiences get to see that it’s not a zero-sum equation. [The Palestinians] are not calling for anyone to be endangered in any way and they are very clear about that. But they aren’t going to sit quietly when they are losing land and their communities are in danger.”

In conclusion, Avni offers a kind of challenge to her fellow Jews.

“What I’d like to see in the Jewish community is a deeper discussion about what constitutes nonviolence,” she says.” We all have a lot of learning to do to understand it beyond the iconic images and clichés. I think Gandhi would be a good starting point.”

Budrus opens Nov. 26 at the Lagoon Cinema in Uptown.

Below is the trailer for Budrus: