Our familiar, too-simple explanation of the Balfour Declaration as a reward to Russian-born chemist Chaim Weizmann for synthesizing acetone for wartime explosives is thoroughly demolished by Jonathan Schneer in his richly detailed account of the intrigue leading to the document.

Weizmann, charming and highly regarded by British leaders, fronted British Zionists’ lobbying efforts. But the declaration by Foreign Secretary Arthur Balfour also came from British politicians’ beliefs that Jews deserved a homeland to be created from carving up the empire of a defeated Turkey, Germany’s World War I ally.

It also was the result of Britain’s desire for sovereignty over the holy places and for limiting the reach of a postwar French-controlled Syria. It conflicted with expectations Britain created for Hejaz Arabs to get them to rebel against Turkey, with late-war feelers for a separate peace with Turkey, and with the desires of assimilationist British Jews, who lobbied fiercely against the Zionist goals.

British policies planted the seeds of today’s Israeli-Arab conflict by seeming to promise the same sliver of land to two peoples, using both as weapons against Turkey, while keeping the contending nationalist movements oblivious to their collision course. 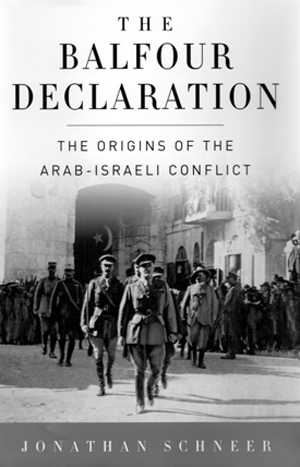 Schneer is a specialist in modern British history, and his story of the politics leading up to the Nov. 2, 1917, declaration is exhaustive — with a huge bibliography. The book includes such details as the London Zionist Political Committee “meeting at the faux-Gothic, faux-Tudor, and long-since-demolished Imperial Hotel on Russell Square.” By the time we get to Weizmann and Britain thwarting a peace mission to Turkey — lest the Ottomans retain Palestine — the account of meetings, memos, recommendations and actions becomes somewhat eye-glazing.

There are enough characters here for a Russian novel; fortunately, the book provides a helpful glossary of names. And it’s not Schneer’s fault that two of the players were British official George Lloyd and Prime Minister David Lloyd George — who was supportive of Zionist aspirations — but at times close attention is needed to avoid confusing them.

Perhaps the Zionists’ strongest ally was Sir Mark Sykes (1879-1919) — he of the 1916 Sykes-Picot agreement that, although never confirmed as a treaty, laid the general parameters of postwar British, French and Arab control. Sykes, once an anti-Semite, worked tirelessly to shape developments to assure a Jewish homeland; Schneer calls this mainly unknown figure “Zionism’s enabler.”

An interesting sidelight for our day is a post-declaration letter from Syrian leaders to Balfour protesting: “Palestine forms a vital part of Syria — as the heart is to the body — admitting of no separation politically or sociologically.”

Schneer displays some annoying habits, the foremost of them being that he inserts himself as narrator with such phrases as “our tale,” “we will discover in our next section” and “figure in our story”; they diminish my feeling for this intensely researched book as a serious history.

He also uses precise but at best obsolescent or foreign terms as “minister plenipotentiary”; “dragoman” (for “professional interpreter”); and the French “pourparlers,” when a simple “conversations” would convey enough meaning.

Yet Schneer also produces such gems as the British Zionists’ hope when the Great War began that “perhaps the ingot of Palestine could be pried loose from the great slab of Turkey’s Middle Eastern empire.” And this: “The tectonic plates of Britain’s Jewish policy began to slide.”

Telling us more than most of us ever expected — or perhaps wanted — to know, The Balfour Declaration is interesting, very readable, and an enormous education in the complicated creation of that seminal document, the issuance of which was considerably less than certain.