Tim Pawlenty accuses Obama of treating Israel as a problem

By NATASHA MOZGOVAYA /Â Haaretz
Former governor of Minnesota and Republican presidential candidate Tim Pawlenty is not impressed with Barack Obama’s Middle East policy, accusing the U.S. president of treating Israel “as a problem rather than as an ally” in his addresses to the State Department and the AIPAC policy conference.
In a speech on Tuesday to the Council on Foreign Relations, Pawlenty lamented the Obama administration’s attitude toward the Middle East, saying “it breaks my heart that President Obama treats Israel, our great friend, as a problem, rather than as an ally.” 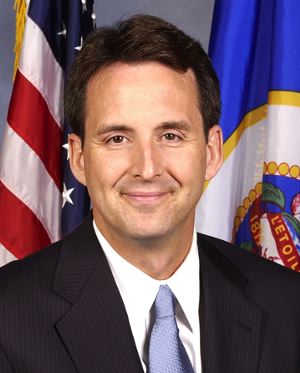 The former governor continued, saying “the President seems to genuinely believe the Israeli-Palestinian conflict lies at the heart of every problem in the Middle East. He said it in Cairo in 2009 and again this year. President Obama could not be more wrong.”
Bear in mind that while Obama did admit in his May speech to the State Department that “for decades, the conflict between Israelis and Arabs has cast a shadow over the region,” he chastised those that made antagonism toward Israel “the only acceptable outlet for political expression.” He also made clear the United States’ commitment to Israel’s security is “unshakeable.”
Pawlenty continued his criticism of the U.S. president, saying that Israeli–Palestinian peace is a more distant reality than “the day Barack Obama came to office,” adding that the U.S. president “doesn’t really have a policy toward the peace process, he has an attitude.”
The Republican presidential candidate claimed that Obama “thinks the answer is always more pressure on Israel,” accusing the U.S. president of having an “anti-Israel attitude,” adding that it is preposterous to think that the prosperity and freedom of countries undergoing upheaval in the region have anything to do with “how many apartments Israel builds in Jerusalem.”
Pawlenty offered an approach of his own, saying he “would never undermine Israel’s negotiating position, nor pressure it to accept borders which jeopardize security and its ability to defend itself.” The Republican made clear that it is unproductive in his eyes to pressure Israel into negotiations with “Hamas or a Palestinian government that includes Hamas, unless Hamas renounces terror, accepts Israel’s right to exist, and honors the previous Israeli-Palestinian agreements.”
This is no revelation. The United States’ current position is nearly identical to this statement, however, perhaps it has become less clearly elucidated in light of recent Hamas-Fatah unity.
Pawlenty condemned Palestinian efforts to delegitimize Israel in its public sector, saying American assistance to the Palestinians must end immediately “if the teaching of hatred in Palestinian classrooms and airwaves continues,” adding that “incitement must end now.”
The former governor recommend “cultivating and empowering moderate forces in Palestinian society.” Pawlenty predicted that “when the Palestinians have leaders who are honest and capable, who appreciate the rule of law, who understand that war against Israel has doomed generations of Palestinians to lives of bitterness, violence, and poverty — then peace will come.”
The Republican criticized Obama’s hesitation to take action in Syria and demanding that the U.S. take a stand in the war-torn Middle East country. Pawlenty echoed the words of Rep. Ileana Ros-Lehtinen, chairwoman of the House Foreign Affairs Committee, calling for the removal of U.S. Ambassador Robert Ford from Syria.
The Obama administration has explained its decision to keep Ford in Syria despite Assad’s brutal crackdown on his people, saying the ambassador provides them with a clearer picture of the facts on the ground.
“We have a clear interest in seeing an end to Assad’s murderous regime,” Pawlenty said. “By sticking to Bashar al Assad so long, the Obama Administration has not only frustrated Syrians who are fighting for freedom — it has demonstrated strategic blindness.”
The presidential candidate said that the fall of Assad would have a ripple effect that would weaken Hamas as well as Hezbollah and Iran, all enemies of Israel, emphatically stating: “Bashar al-Assad must go.”
Pawlenty accused Obama of failing to present a coherent response to the Arab Spring, alleging that he has been “slow, and too often without a clear understanding of our interests or a clear commitment to our principles.” He continued, adding that “instead of promoting democracy he adopted a murky policy he called ‘engagement.’”
The National Jewish Democratic Council criticized Pawlenty’s remarks, saying that the Republican “has proven that he stands with those seeking to make support for Israel a partisan wedge issue” in his “baseless and unfounded shots at President Barack Obama’s outstanding pro-Israel record.”
NJDC President and CEO David A. Harris said that “Pawlenty’s constant misrepresentations of President Barack Obama’s pro-Israel record are profoundly wrong and must stop immediately.”
Harris accused Pawlenty of ignoring Obama’s strong support for Israel, sending the world the wrong message in his claims that Obama holds an “anti-Israel attitude.” The NJDC president said that such baseless attacks “especially with this level of vitriol and empty rhetoric” send Israel’s enemies a dangerous message that the Obama administration “is anywhere but squarely in Israel’s corner.”
He called for a stop to such “partisan games,” cautioning that they pose a potential threat to Israel’s security.