Swaying to the hidden melodies

Musical innovator Jeremiah Lockwood and his band, The Sway Machinery, will be featured in the Cedar Cultural Center’s upcoming Global Roots Festival

Jeremiah Lockwood imbibedÂ hazzanut, cantorial music, at the knee of his grandfather, a renowned cantor from New York City. OnÂ Hidden Melodies Revealed (JDub), the debut album from The Sway Machinery, Lockwood sings a number of songs with Hebrew lyrics straight from the Jewish liturgy.

When you listen to him sing “A Staff of Strength in the Hands of the Righteous,” for example, his vocal shadings evoke the great cantors from the Pale of Settlement whose records he heard in his zaide’s study. Following a dramatic guitar and horns intro, Lockwood sings lyrics from the Torah processional: “Ki mi-Tzion tetze Torah…” It’s an exciting, amped-up rendition of Jewish music, like nothing that has come before.

On the group’s Web site, Lockwood explains: “I am revisiting the work of my heroes of Chazzanus, particularly the music of my grandfather, the legendary Cantor Jacob Konigsberg. In this way I am hoping to return to that place of childlike awe that he opened to me and share it with the world.”

Lockwood’s band, The Sway Machinery, will perform Sept. 23 at the Cedar Cultural Center in Minneapolis. Opening for the band will be Khaira Arby, the great singer from Timbuktu, Mali, in West Africa. 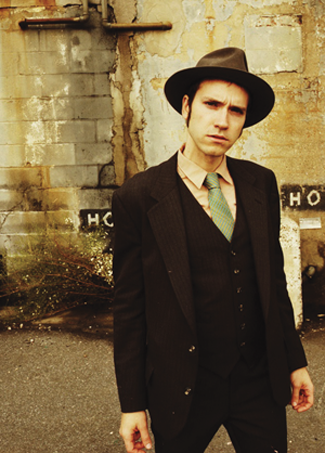 Jeremiah Lockwood: A cantor grandfather provided “incredibly inspiring ideas about how to approach being a musician.” (Photo: Scott Irvine)

Music fans in the Twin Cities and environs saw Lockwood play electric guitar on the Cedar stage with Balkan Beat Box in early August. The 32-year-old musician and composer told the AJW during a recent telephone chat from his home in Brooklyn that he looks forward to returning to the West Bank: “I’m a big fan of the Cedar, it’s a great venue.”

The Sway Machinery show is part of the Cedar’s Global Roots Festival 2010, and the collaboration between the eclectic New York-based ensemble and the African musicians should be one of the event’s high points.

“Her music isn’t out on any record labels in the United States. I was able to find her music on some blogs and on YouTube.”

Asked about the pronunciation of Arby’s first name, Lockwood said, “It’s kind of like a ‘chet’ almost — Khaira, Khaira Arby.”

Speaking of YouTube, you can find an enchanting video of The Sway Machinery playing with the Malian band Super Khoumeissa at the annual Festival of the Desert, which took place in Timbuktu in January (see video below).

“That was an impromptu jam session performance at one of the side tents at the [Festival of the Desert],” he explains. “We heard them playing, and it was just kind of a moment of musical clarity — just incredible musicians representing a style of music that’s almost completely unknown outside of Mali, the takamba style. So, we wanted to play with them; we arranged to do this performance…. That was a really fantastic discovery for us; and that interaction in that tent was a particularly pungent experience.”

Lockwood says that some members of Super Khoumeissa, a group called Super 11, later joined The Sway Machinery on recording sessions in Bamako, the capital of Mali. Other notable African guest artists will be heard on The Sway’s new album,Â House of Friendly Ghosts, which should be out early in 2011.

As forÂ Hidden Melodies Revealed, Lockwood says that “it’s kind of a concept album. Even though the album isn’t only Rosh Hashana music, the concept was that we were going to be creating this body of musical work and an event around the theme of Rosh Hashana, and the renewal of the year, and the incredible emotional reserves that a cantor has to put into this performance on the New Year.”

He adds, “My family are cantors and Rosh Hashana is like the volcano erupts — all the energy of the year kind of goes into this week,Â Yamim Noraim [Days of Awe]; so, growing up, my grandfather would take a month off before Rosh Hashana every year. He wouldn’t see anybody. He’d just hole up in his room basically…. He didn’t want to think about anything other than being ready.”

The Sway Machinery will perform many of the songs onÂ Hidden Melodies Revealed, along with some of the new material recorded in Mali, performing with Khaira Arby and her band, when they appear next week at the Cedar.

Lockwood served a kind of musical apprenticeship playing on the streets of New York as a teenager with Carolina Slim, an exponent of Piedmont blues who is now in his 80s. He recorded a solo album,Â American Primitive (Vee-Ron Records), in 2006. Lockwood was awarded the Six Points Fellowship for Emerging Jewish Artists in 2007, which allowed him to develop the music forHidden Melodies Revealed. He also is the Forward’s artist-in-residence, writing a series of columns called “The Niggun Project.” He lives with his wife, Shasta, and their sons, Moses Lion and Jacob Ulysses.

It’s been a busy, fertile period of late for Lockwood, who says that he’s busy “trying to spread the word, and sharpen our skills and make good music.”

And here’s The Sway Machinery playing in Mali with Khaira Arby: