Rochelle Sutin was born in prewar Poland and captured by the Nazis at 16. She saw dozens of relatives killed, but managed to escape into the woods. There, she met Jack Sutin, and the two spent years as partisan fighters, before marrying on Dec. 31, 1942, in an underground bunker.

After living in a displaced persons’ camp in Germany, where the couple welcomed their daughter, Rochelle and Jack came to St. Paul in 1949. They spoke often about their experiences during the war, which was chronicled in an award-winning book,Â Jack and Rochelle: A Holocaust Story of Love and Resistance (Graywolf Press), edited by their son, Lawrence.

“They wanted their story told,” Lawrence Sutin told the AJW in 2005. 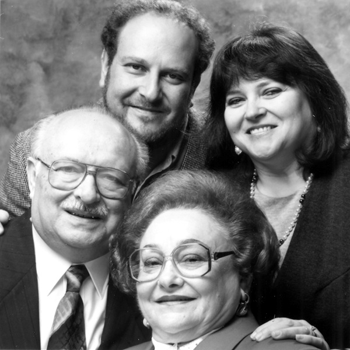 Jack and Rochelle, which won the Minnesota Book Award and Midland Authors Award, is aÂ personal account of the Sutins’ experiences during the Shoah, and describes the dangerous circumstances under which they survived, fought back and fell in love.

In 2005, the book was adapted for the stage by local playwright Buffy Sedlachek, and had its world premiere at Stages Theatre Company in Hopkins. The play was directed by Steve Barberio.

The play was staged again in March of this year by Theater Or at the Sabes JCC.

“Jack and Rochelle’s story takes them from their conventional, comfortable urban middle-class lives in Poland with loving parents and dance parties down the vortex of loss and fear before they climb the ladder of defiance and triumph as partisan fighters,” Doris Rubenstein wrote, in her review for the Jewish World. “This is a lot to pack into a 90-minute play, both artistically and emotionally. But the story and the actors achieve this goal: at the end of the performance, our audience remained still and in its seat, waiting for more, wanting to connect with the actors and their characters.”

The Sutins’ daughter, Cecilia Dobrin, described her mother as a “hero.”

“She lived her entire life with great courage,” Dobrin told the Star Tribune. “She will be greatly missed by everyone who knew and loved her. But her spirit will live forever in our hearts and minds.”

The Sutins started an import business, Rochelle, Inc., which they ran into the 1970s. Rochelle Sutin served as the company’s vice president.

“She knew how easily it could be taken away,” Dobrin told the Star Tribune, explaining her mother’s appreciation for her family and her success. “But she was not bitter. She [and my father] knew that the best revenge was to be happy and have a family.”

In addition to her son and daughter, Rochelle Sutin is survived by her husband, Jack; three grandchildren; and two great-grandchildren.