Dr. Ofer Merin directed surgical activities at the Israeli field hospital in the aftermath of the January earthquake

On a train bound for Auschwitz, a mother throws her 9-year-old son into the woods. He wanders into a small Polish village, where he is taken in by a Christian woman and hidden for 18 months.

In 1950, the boy makes his way to Israel, where he eventually becomes a doctor. Years later his second son, Ofer, follows in his footsteps — and earlier this year directed surgical activities at the Israeli field hospital in Haiti in the aftermath of the catastrophic earthquake.

As it is written in the Talmud, “Whoever saves a life, it is as if he has saved an entire world.”

Dr. Ofer Merin, a cardiothoracic surgeon, is the deputy director general and director of the trauma unit at Shaare Zedek Medical Center in Jerusalem. He is also a lieutenant colonel in the Israel Defense Forces’ Medical Corps, where he serves as chief of army field hospitals.

Haiti was Merin’s first delegation. He spoke about his experience there at a recent briefing and update for Twin Cities Maimonides Society members and communal leaders. Merin was in Minneapolis under the auspices of the Jewish Community Relations Council of Minnesota and the Dakotas (JCRC), a partner agency of the Minneapolis Jewish Federation.

“It does change… your perspective on things in life,” Merin told the AJW. “Everyone is always very busy with their intimate, close issues of themselves and these [events] open your mind, when you really see the magnitude of disasters in other parts of the world. It changed my life in different ways.” 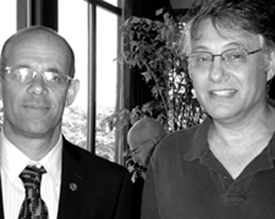 The Jan. 12 earthquake, which measured at a magnitude of about 7.0, lasted only 40 seconds, but its force devastated the small island country of 9 million people. Approximately 230,000 people died and 1 million people were left homeless.

But the number that mattered most to the medics who were mobilizing to help was that of the injured: 300,000.

“That number was beyond anyone’s imagination,” Merin said.

As they do each year, Merin’s entire unit — nearly 500 people — had performed a mass casualty drill in Israel just one month prior to the earthquake. Less than 48 hours after the earthquake hit, Merin’s unit put that training to the test, leaving their jobs and families behind, and boarding a plane for Haiti.

With the consent of the Israeli government and some true chutzpa, the delegation — 121 IDF nurses, physicians and medics, and 109 members of the Israeli Home Front Command — landed in Port-au-Prince, Haiti, and began setting up a field hospital in a soccer field owned by a Jewish man. Six hours later, on the morning of Jan. 16, the hospital started to see its first patients.

One news report referred to the IDF site as the “Rolls Royce of emergency medical care.” The 80-bed field hospital was fully functional and was the only place that provided X-rays and other imaging services.

“We were also the only hospital to have a synagogue,” Merin said, showing a photograph of a small tent in which two doctors davened.

The field hospital employed bar code technology to keep track of patients and have an “exact knowledge of what’s going on,” according to Merin. The “very simple, efficient” system also allowed family members to search for loved ones.

But the team faced a variety of issues, from no air-conditioning and running out of supplies to ethical dilemmas and dealing with their own emotions.

“You can’t treat all of them, so how do you make those decisions?” Merin asked. “As a physician, you’re always sidetracked by the patient that you cannot treat and you wonder, Did I do the right thing?”

Merin’s team established ethical committees so that one doctor was not responsible for making the sole life-or-death decision about a patient, and developed criteria for which patients they would accept. Out of their first 500 patients, only 13 died.

“We knew we picked up the right patients,” Merin said.

Patients were also discharged as soon as they were able to leave, in an effort to treat others with more severe injuries.

“I’m sure we made mistakes, but we were trying to do the right thing for the maximum number of people over there,” Merin said.

After more than a week in Haiti, Merin’s trauma unit began seeing fewer patients with traumatic injuries. And, with the arrival of the USS Comfort, the United States Navy hospital ship, and the reopening of the main hospital in Port-au-Prince, the Israeli delegation went home.

The IDF field hospital was operational for 10 days. In that time, the team saw 1,111 patients, performed 242 surgeries and delivered 16 babies. Only 17 patients died.

Dr. Merle Hillman is an emergency physician at United Hospital in St. Paul and a team commander of the Minnesota chapter of the National Disaster Medical System (NDMS). He attended Merin’s talk.

“We should be proud of what they did,” he said of the Israeli delegation. “They are really good at it.”

Merin said he was proud to represent the Jewish state.

“It was a privilege, it was an honor to go and assist other people in need, and we were very proud that we were going in the IDF uniforms,” Merin said. “It was an extremely meaningful time in my life… [We came back] with the knowledge that we did some good.”

In May, Merin received the Medal of Valor from the Simon Wiesenthal Center in Los Angeles on behalf of the IDF. Upon accepting the award, he spoke of the Polish woman who had saved his father and enabled his family to be rebuilt in Israel.

“From this woman’s example, I learned the power of what it means to save a life,” Merin said. “In the magnitude of the disaster, [the IDF personnel] were merely a drop in the ocean. But for the 1,100 people we had the privilege to treat, this represents the true spirit of medicine. That no matter the race, religion or ethnicity of the patient, we will always treat them to the best of our abilities.”

Kaddish for a world destroyed