What’s the right basis of living?

Moshe Koppel makes a provocative argument for the societal value of religion and religious communities, even if his prediction of societal doom for abandoning them includes some assumptions open to argument.

He illustrates Judaism Straight Up with two Jews several decades apart, calling them Shimen and Heidi. They disagree on the right basis for living. 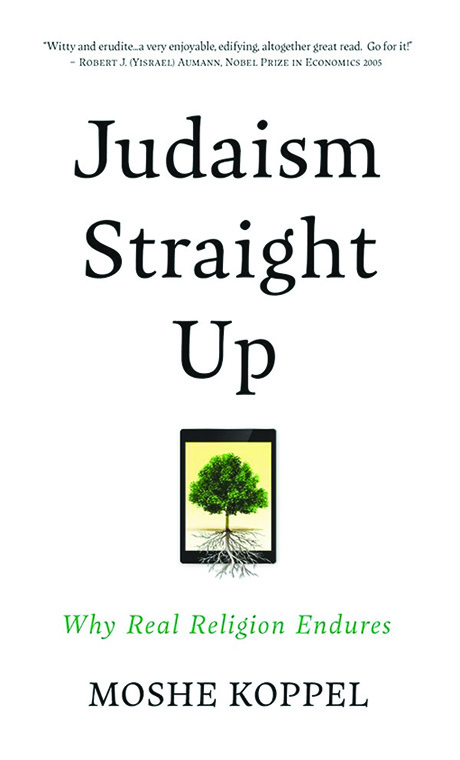 When Koppel met Heidi, she was a Princeton humanities grad student who’d “taken it upon herself to educate me about the special duties of the Jewish people to humanity.”

She asked him how he could justify his “narrow parochial tribal loyalty.” Didn’t the Shoah teach Jews never to put their “parochial interests ahead of others’ interests?”

Shoah survivor Shimen was Koppel’s grandfather’s best friend among the Gerer Hasidim with whom he prayed. Their Manhattan shtiebel (prayer room) “had the look and feel of the hundreds… that dotted Poland before every one of them was destroyed.”

Members retained loyalty to their prewar ways, absent the beards and fur hats. “They were God-fearing Jews, but they felt sufficiently at home with God to take liberties as necessary,” Koppel says.

The Heidi types Koppel has known “patronize old Shimens as addle-brained relics out of touch with contemporary doctrines.”

But Koppel, a computer science professor at Bar-Ilan University, sees the world through their eyes: “My views are hopelessly, and proudly, old fashioned.” Some seem to veer into the terrain of right-wing politics. (Examples: “social costs of government handouts” and of laws about recycling.)

Straight Up focuses on “three main differences” between Shimen’s and Heidi’s worlds. The first is “the scope of morality.” Heidi, raised in a kosher-at-home milieu that she has discarded, focuses on fairness.

Shimen feels morally bound to the Jewish people in a world where choices “all are fraught with moral considerations” but are second nature, requiring little thought. For matters that do, Shimen can turn to Jewish texts, even a rabbi.

The second difference “concerns the mechanisms through which communities determine the boundaries of the forbidden and the obligatory.”

“The third difference concerns the relationship of one’s beliefs about the world to one’s social and moral commitments.” Heidi’s commitments come from studying science and history; Shimen’s come from his religious beliefs.

Heidi wants the state to create and enforce policies promoting public welfare and equality but without involving or enforcing restraint and loyalty. Shimen wants “the meaning and purpose that he gets from participating in the ongoing project of the Jews.”

Heidi wants freedom from such projects. For her, canonical beliefs have no credibility or appeal.

We don’t know the extent to which these views are theirs or Koppel’s assumptions. But there is some truth in each of these characters.

“Bereft of tradition, individuals can’t simply reason their way to rules that encourage virtue” or create “a strong sense of common purpose,” he says. “Individual autonomy is reduced to mere self-indulgence and self-centeredness. Social capital diminishes and social bonds fray,” increasing need to “rein in people through powerful institutions,” he says.

Apparently that would be government, but cooperation for social equilibrium requires not only fairness but also deferral of pleasure and expressions of group solidarity, qualities sometimes in tension, he says.

Koppel has a thoughtful and interesting take on the roots of Judeophobia and on young Israelis’ growing interest in Judaism as a national culture.

Straight Up is crammed with insightful observations, plus good, witty writing. It’s worthwhile reading, requiring thought, even when disagreeing.

“Traditional belief, like Shimen’s, gives the moral life direction, depth and meaning,” Koppel says. “Those who abandon such belief often err in taking for granted the virtues that it bolsters.”

The need for that belief seems expressed subtly by the cover art: a small, framed illustration of a tree, full and green, flourishing because of roots so deep they extend below the frame.

Editorial: A miraculous vaccine — for some