Minnesota’s junior senator will have a full plate, sitting on committees dealing with health care and the confirmation of a Supreme Court justice

A year before the 2004 elections, Al Franken was working with Democrats to stop Pres. George W. Bush from winning a second term as president; and he also was mulling a run for the U.S. Senate seat held by Norm Coleman.

During a 2003 interview with the Jewish World, Franken offered a slogan for his possible campaign, against the incumbent senator: “The New York Jew who was actually raised in Minnesota.”

“That’s more in the way of a joke, probably,” the St. Louis Park native added. “I may not rely entirely on that.” The election was still five years away.

In 2007, Franken struck a more serious tone when he announced that he was a candidate for the Senate seat once held by his good friend Paul Wellstone, who perished on Aug. 20, 2002, along with his wife, Sheila; daughter, Marcia; three campaign aides, and two pilots, in a small plane that crashed in the woods near Eveleth, Minn.

Wellstone was running for his third term in the Senate; former Vice President Walter F. Mondale was hastily drafted to take Wellstone’s spot on the ballot, but was defeated by Coleman.

On Tuesday afternoon — after a rigorous campaign for the DFL Party endorsement, a general election race won by 312 votes out of more than 2.9 million votes cast, followed by a state-mandated recount, and a subsequent legal challenge by Coleman that was turned down by the Minnesota Supreme Court last week — Franken took the Senate oath of office with his hand on a Bible that belonged to the late Sen. Paul Wellstone.

In the words of a song by the Grateful Dead, Franken’s favorite rock band, what a long, strange trip it’s been. 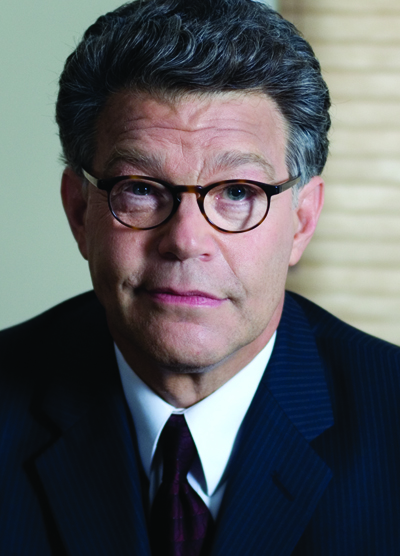 Al Franken has put the comedy shtick on hold, as he makes the transition to lawmaking in the U.S. Senate.

The eight-month-long recount and legal battle came to an end on June 30, when the Minnesota Supreme Court, in a 5-0 vote, turned back the arguments advanced by Norm Coleman’s lawyers, which sought to challenge the trial court decision upholding Franken’s razor-thin margin of victory.

At the end of their 32-page decision, the Supreme Court justices “affirm the decision of the trial court that Al Franken received the highest number of votes legally cast and is entitled under Minn. 32 Stat. Â§ 204C.40 (2008) to receive the certificate of election as United States Senator from the State of Minnesota.” As expected, Gov. Tim Pawlenty, along with Minnesota Secretary of State Mark Ritchie, signed the election certificate.

Just hours after the state Supreme Court handed down its decision last week, Norm Coleman, in a press conference held in the backyard of his St. Paul home, conceded the race to Franken. Coleman told the assembled reporters that he had just spoken on the phone with Franken, and congratulated him on his victory in the Senate contest.

“Ours is a government of laws, not men and women,” Coleman said, in his prepared remarks. “The Supreme Court of Minnesota has spoken and I respect its decision and will abide by the result. It’s time for Minnesota to come together under the leaders it has chosen and move forward. I join all Minnesotans in congratulating our newest United States Senator — Al Franken.”

The scene on Tuesday then shifted to downtown Minneapolis, where a much larger scrum of reporters, photographers and supporters assembled outside of Al and Franni Franken’s townhouse on 10th Street.

The couple, along with several aides, stepped out the front door to cheers from the crowd. Franken told the press that he was ready to serve the people in Minnesota in the nation’s capital.

Franken was referring to the chatter about Senate Democrats finally attaining a 60-vote supermajority, which could shut off a Republican filibuster.

The end to another barn burner of a Minnesota election contest also means that a Jew will continue to represent Minnesota in the Senate. A Coleman victory also would have kept alive the remarkable string of Jewish senators serving continuously since 1978 — Rudy Boschwitz, Wellstone, Coleman, and now Franken. This has occurred in a state with a Jewish community that is about one percent of the general population.

Steve Hunegs, executive director of the Jewish Community Relations Council of Minnesota and the Dakotas (JCRC), told the AJW: “The JCRC congratulates Sen. Franken on his hard-earned victory, and Sen. Norm Coleman on his graciousness. We note that Sen. Franken’s membership on the Judiciary Committee means that the committee can nearly convene a minyan. We look forward to working with Sen. Franken in the years ahead, as well as continuing our relationship with Sen. Coleman.”

Writing on the JTA politics blog last week, Eric Fingerhut pointed out that with “Coleman’s defeat and the decision by Pennsylvania’s Arlen Specter to join the Democratic caucus, the Senate now has no Jewish Republican members. The House of Representatives has one Jewish GOPer, Minority Whip Eric Cantor of Virginia.”

And Fingerhut added, “More specifically, for the first time in decades, a moderate GOP Jewish voice — embodied over the years not only by Specter but also Rudy Boschwitz of Minnesota, Warren Rudman of New Hampshire and the late Jacob Javits of New York — will be absent from the Senate.”

So, apart from joining a sizable group of Jewish coreligionists, how will Al Franken fare in the U.S. Senate?

Paul Wellstone — whose politics were more in the mold of fiery, left-wing Minnesota populism than Franken’s brand of liberalism — ruffled some feathers when he first went to Washington. And Hy Berman, emeritus history professor at the University of Minnesota and a keen observer of state politics over many decades, told the AJW that Hubert Humphrey also had a rough time when he entered the elite upper house of Congress.

Humphrey had introduced an alternative civil rights plank, which was opposed by Pres. Harry Truman, at the 1948 Democratic National Convention. The measure backed by the Americans for Democratic Action, and liberal icons like Eleanor Roosevelt and labor leader Walter Reuther, was passed and triggered a walkout by the Dixiecrats who wanted to go slow on racial integration.

“[Humphrey] became a senator at a time when the Southern Democrats were dominating the structure of the Senate, and they looked upon him as, if not a Communist, then close to one,” Berman said, and added that Humphrey had to spend several years working to undo the perception by the establishment figures in the Senate that he was a “troublemaker.”

Of course, Franken enters the Senate at the bottom of the seniority list, and in the midst of a very busy time for the body.

“The trickiest part here is that you don’t get to go through an orientation, a period to get ready, an immersion in a process — you get immersed right in it,” commented Norman Ornstein, a resident scholar at the American Enterprise Institute in Washington, D.C., regarding Franken’s late arrival in the Senate.

Ornstein said that “the policy process is moving along at light speed,” and Franken will be serving on two committees — Judiciary and Health — “that have hugely important agendas that have already moved significant distances along the way.”

Franken will be dealing immediately with major health care legislation and the confirmation of a new Supreme Court justice.

Despite the daunting challenges facing the new senator, Ornstein thinks Franken will hit his stride eventually.

“I don’t think that there’s any great problem here, because it just means that it’s going to take a little bit of orientation of his own, and he’ll stumble a little bit,” Ornstein remarked. “But he is a policy wonk — he knows an enormous amount about these issues. He knows how to work with people; he’s going to have a first-rate staff.”

Minnesotans seem relieved now to have the contentious 2008 Senate race in the rear-view mirror. They are looking forward to Al Franken doing the people’s work in Washington, in a time of economic crisis and U.S.-led wars abroad. Franken essentially must focus on the promises he made last week: “to put people to work, improve education, make Minnesota the epicenter of a new renewable energy economy, and make quality health care accessible and affordable for all Minnesotans.”

“He’s bright enough, he has enough good sense and enough good advice, that I suspect that he’ll be a very good senator after awhile,” Hy Berman concluded.