Mpls. Jewish Film Festival concludes with 'Bewoket,' a film about a Jewish American healer in Ethiopia 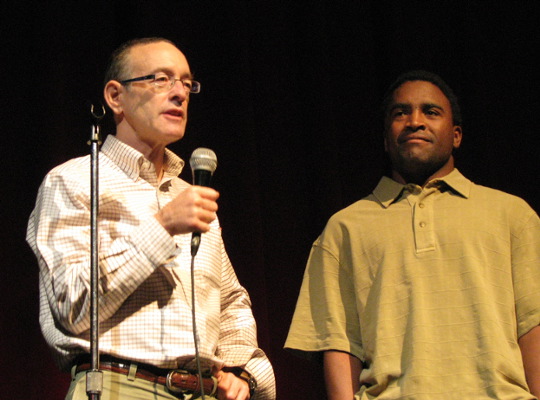 Dr. Rick Hodes (left) was joined by Taka Larson, a survivor of the 1994 Rwanda genocide, on Sunday at the Sabes JCC. (Photo: Mordecai Specktor)

The 2010 Sabes Foundation Minneapolis Jewish Film Festival ended a successful run on Sunday, with an appearance by Dr. Rick Hodes, whose humanitarian work in Ethiopia is the focus of the documentary Bewoket: By the Will of God.
The eponymous title character is a nine-year-old Ethiopian boy who runs away from his small village in search of life-saving medical treatment. At the end of a 60-mile trek, Bewoket finds Hodes, a native of Long Island, New York, who has spent the past 20 years working in Africa. Hodes arranges to send the charming boy to the United States for a heart operation.
FilmmakersÂ Andrea Â Mydlarz Zeller and Sam Shnider depict stories in their film that do not end happily, but Bewoket regains his health and becomes part of the Hodes clan of adopted children in Addis Ababa, the Ethiopian capital.
During a Q&A with Hodes following the screening, the doctor was joined onstage by Taka Larson. Hodes recalled how he and other doctors tending to refugees of the 1994 Rwanda genocide found young Taka, who had been wounded by a machete blow to the head and left for dead in a roadside ditch.
Taka received medical care at the Israeli Military Hospital in Goma, Zaire. He was adopted by Nancy Larson, a paramedic who met him in Africa, and her husband, Kyle, of Maple Grove. Taka played football and hockey at Totino Grace High School and now attends the University of Minnesota-Duluth. — Mordecai Specktor

Armenians mark their ‘holocaust’ on April 24