By RON KAMPEAS and MARCY OSTER
(JTA) — Jewish and Israeli leaders welcomed the news that Osama bin Laden was killed in a firefight with U.S. forces in Pakistan.
The body of bin Laden, head of the terrorist group al-Qaida and the mastermind behind the Sept. 11, 2011 attacks on New York and Washington, was taken by U.S. forces and reportedly buried at sea, presumably to prevent his grave from becoming a shrine, The New York Times reported. The body was buried within 24 hours of his death, reportedly in respect of Muslim tradition, according to the Times.
“The State of Israel joins the American people on this historic day in celebrating the elimination of Osama bin Laden,” read a statement from the office of Prime MinisterÂ Benjamin Netanyahu. “This is a resounding victory for justice, freedom and the common values of all democracies that are resolutely fighting shoulder to shoulder against terrorism.” 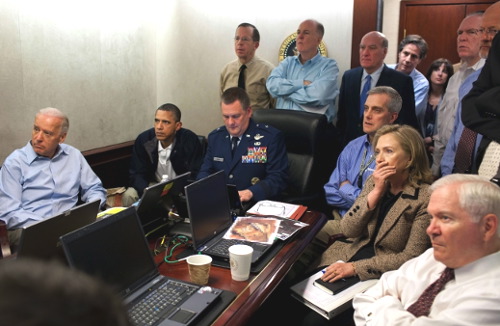 President Barack Obama and Vice President Joe Biden, along with members of the national security team, receive an update on the mission against Osama bin Laden in the Situation Room of the White House on Sunday. (Photo: White House / Pete Souza)