Ethan Buckner, 19, returns to volunteer in the aftermath of the Jan. 12 earthquake

Nineteen-year-old Ethan Buckner, a freshman at Vassar College in Poughkeepsie, N.Y., does not want to be a doctor, a pharmacist or anything in the medical field. But on May 8, he left for his second two-week stint in Haiti to volunteer at the Project Medishare hospital in Port-au-Prince.

Buckner, the son of Adath Jeshurun Congregation Cantor Scott Buckner and his wife Marcy, first volunteered in Haiti over spring break, March 8-22. Now, he’s back for a second time to help with medical relief efforts in the aftermath of the catastrophic earthquake that shook the small island country on Jan. 12.

“I haven’t been involved in a relief effort or anything remotely like this in the past,” Buckner told the AJW prior to leaving for his second trip. “I have a personal history of social justice, political activism, working with numerous local and national organizations on different campaigns and initiatives, and I’ve done a lot of planning and organizing. It was a little bit of a strange inspiration for me when, after the earthquake, it struck a different tone for me and I felt compelled to go.” 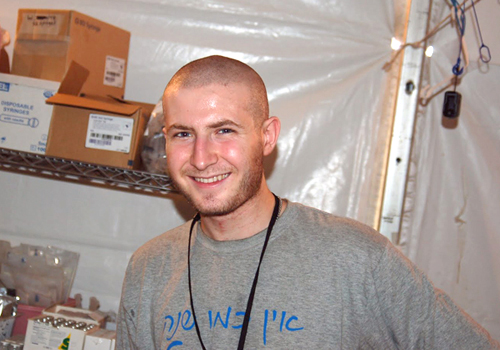 Twin Cities native Ethan Buckner is in Haiti for the second time to volunteer with medical relief efforts. (Photo: Courtesy of Ethan Buckner)

Buckner initially wanted to go alone, but found a friend and fellow Vassar classmate to accompany him on that first trip. Together, the pair spent two weeks at the hospital run by Project Medishare, a nonprofit organization affiliated with the University of Miami Global Institute.

Buckner said the hospital welcomes about 150 new volunteers each week.

When he first arrived at the hospital, Buckner was asked to sort and stock supplies that were sent to Port-au-Prince from around the world. He was then asked to help manage the logistics and procedures of the site before volunteering to train as a pharmacy technician.

“I didn’t have the expertise that some of the other folks would have, but I ended up spending about 17 hours plus a day mixing IVs,” Buckner said. “I also ended up doing a lot of work in my second week in the neonatal and pediatric intensive care unit, which got very, very intense and difficult and a bit too high pressure, sometimes, for the extent of my limited and unprofessional training.”

Buckner said he was able to get by, and learned and adapted very quickly to the changing conditions. He said the same was true for the professionals with whom he worked.

“Sometimes we wouldn’t necessarily have every type of personnel that a hospital would generally need,” he said. All those who are down there “have been, and continue to be, extended well beyond their professional training and are really stepping it up to make the hospital work and run.”

Buckner will remain in Haiti this time until May 22, but plans to stay involved with the relief efforts in some sort of long-term, sustainable way.

“As it is, the situation [in Haiti] is only going to get and is getting worse, so I just encourage people to stay aware and get involved in any way they are able,” Buckner said. “It’s recognizing that we’re all interconnected as global citizens and people are so horribly affected by this tragedy. Personally, if I was in that situation, I would sure hope that someone would help lift me back up on my feet.”