By RON KAMPEAS and AMI EDEN

On his radio and TV shows last week, Beck portrayed Soros as running a shadow government bent on controlling the global economy. Some liberal pundits and organizations responded by accusing Beck of relying on anti-Semitic tropes. But the widest range of condemnations came in response to Beck’s Nov. 10 comments on Soros’ childhood activities during the Holocaust:

“Here’s a Jewish boy helping send the Jews to the death camps. And I am certainly not saying that George Soros enjoyed that, even had a choice. I mean, he’s 14 years old. He was surviving. So I’m not making a judgment. That’s between him and God. As a 14-year-old boy, I don’t know what you would do.”

In fact Soros, then 13 and living under the protection of a non-Jewish Hungarian, on one occasion joined the older man when he was ordered by Nazis to inventory the estate of a Hungarian Jew who had fled. On another occasion, the local Jewish council had ordered Soros to deliver letters to local lawyers. Soros’ father, Tivadar, realized the letters were to Jewish lawyers and meant to expedite their deportation. He told his son to warn the targets to flee and ended the boy’s work with the council. 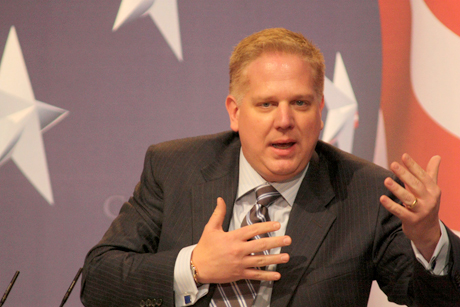 Some Jewish groups and pundits are saying that Glenn Beck (above) went too far with his criticism of George Soros. (Photo: Gage Skidmore)

Soros, 80, has been slammed in some Jewish circles over his calls for increased U.S. engagement in the Middle East peace process and his strong criticism of Israeli policies. In recent months, some pro-Israel advocates and pundits have ripped J Street for accepting his money and lying about it. And during the Bush administration, it was Soros who was accused of unfairly playing the Holocaust card when he compared the Bush administration to the Nazis and communist regimes.

This time around, though, the loudest Jewish voices belong to those defending Soros from Beck’s attacks.

“This is the height of ignorance or insensitivity, or both,” said Abraham Foxman, the director of the Anti-Defamation League.

“As a kid, at 6, I spit at Jews — does that make me part of the Nazi machine?” Foxman said, referring to the fact that as a child he was protected by non-Jews who had not revealed his background to him. “There’s an arrogance here for Glenn Beck, a non-Jew, to set the standards of what makes a good Jew.”

Elan Steinberg, the vice president of the American Gathering of Holocaust Survivors and their Descendants, called Beck’s attack “improper.”

“When you make a particularly monstrous accusation such as this, you have to have proof,” he said. “I have seen no proof.”

In the clearest sign that Beck may have overreached within Jewish circles, Jonathan Tobin of the conservative journal Commentary also took to the blogosphere to slam Beck.

“Political commentary that reduces every person and every thing to pure black and white may be entertaining, but it is often misleading,” wrote Tobin, who noted that he and his publication can usually be found in the camp of those bashing Soros. “There is much to criticize about George Soros’s career, and his current political activities are troubling. But Beck’s denunciation of him is marred by ignorance and offensive innuendo.”

Tobin echoed some liberal pundits in accusing Beck of taking Soros’ comments out of context, including a recording of the philanthropist discussing his efforts to undermine various governments. According to Tobin, Beck failed to make clear that Soros was talking about his support of Cold War-era dissidents in the Soviet Union and Soviet satellite states.

“In other words,” Tobin wrote, “while Soros’s current politics is abhorrent, he was one of the good guys when it came to the fight against Soviet Communism.”

Beck used the Nov. 12 edition of his radio show to defend himself against claims of anti-Semitism by describing himself as a “friend of the Jews.” He also argued that it was ridiculous to accuse him of playing up anti-Semitic stereotypes since he has spoken out against efforts to demonize bankers.

During the same broadcast, Beck mistakenly claimed that the ADL was accusing him of anti-Semitism regarding the comments about Soros. In fact, Foxman and the ADL never used the A-word, instead calling Beck’s comments about Soros “completely inappropriate, offensive and over the top.”

Unrelated to the flap over Soros, Foxman sent Beck an Oct. 22 letter apologizing for an ADL direct-mail piece that included Beck in a list of celebrities who had made anti-Semitic remarks over the past year.

“Even though we may disagree from time to time,” Foxman wrote, “I know that you are a friend of the Jewish people, and a friend of Israel.”

During his Nov. 12 radio broadcast, Beck also discussed having directed his staff to investigate whether any of Soros’ foundations or organizations had given money to the ADL. As it turns out, the ADL has denied receiving money from Soros. The organization did, however, recently organize a fund-raising dinner to honor Beck’s boss, Rupert Murdoch, the chairman of News Corp., which owns Fox News.

This is not the first time that Beck has found himself being criticized by Jewish groups over comments relating to the Holocaust. Several Jewish leaders confronted Beck after he said during the recent election season that terms like “social justice” lead to death camps.

Subsequently Beck sent Greer a note saying that he understood “the sensitivity and sacred nature of this dark chapter in human history.” Last week, in response to the broadcasts about Soros, Greer said that Beck and Fox had made a “mockery of their professed understanding.”

Greer sparked controversy following the meeting with Fox officials by claiming that they had sided with Jewish leaders. Fox officials and other sources familiar with the meeting disputed Greer’s account, saying that Ailes and Cheatwood simply expressed sympathy for their concerns but never criticized Beck.

Jewish Funds for Justice has intensified its attack on Beck, Murdoch and Fox News with this video:

Ruth Gruber film to be screened in Minneapolis