Scholars of the Holocaust and genocide history met Jan. 26 in Stockholm, Sweden, to mark the 10th anniversary of the Stockholm Declaration, which established Holocaust Remembrance Day. The date of the somber commemoration marks the liberation of the Auschwitz-Birkenau death camp in 1945.
At the invitation of the Swedish Ministry of Foreign Affairs — after writing stories about Raoul Wallenberg, one of the Righteous Diplomats who saved Jewish lives in Budapest, Hungary, in the latter years of the Shoah — I attended theÂ Stockholm International Forum on the Holocaust, Jan. 26-28, 2000. It was an extraordinary gatheringÂ Â in the Swedish capitalÂ of state and government leaders from around the world, along with academics in the fields of Holocaust and genocide studies.
It was at the 2000 gathering, during a meeting at the Riksdag, the Swedish parliament, that the establishment of Holocaust Commemoration Day was announced. 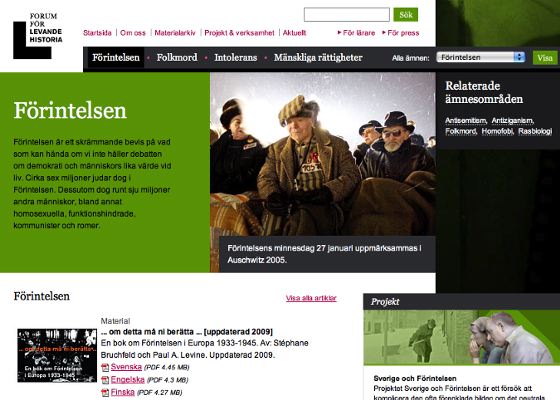 Sweden’s Forum for Living History promotes education about the Holocaust and genocide around the globe.

The Swedish initiative in Holocaust education and commemoration has continued for a decade. On the 10th anniversary of Holocaust Remembrance Day, Israeli Prime Minister Benjamin Netanyahu led a delegation to Poland. Haaretz reported that on Wednesday Netanyahu addressed dignitaries gathered at Auschwitz and warned about new threats to the Jews and Israel:

In what was apparently a thinly veiled reference to Iran, Netanyahu called on the international community to come together to confront “impending dangers”.

Israel believes Iran to be building a nuclear bomb and views the Islamic Republic as an existential threat. Iran insists its nuclear program is purely for civilian purposes.

“We must warn of the impending danger to the rest of the world and at the same time to be ready to defend ourselves,” Netanyahu said. “The most important lesson from the Shoah is that murderous evil must be stopped as soon as possible, before it can realize its schemes.”

Haaretz also reported that earlier on Wednesday, Pope Benedict XVI recalled the 65th anniversary of the liberation of the Nazi death camp of Auschwitz, during his weekly general audience back in his native Germany.Â The pope, referred to the 65th anniversary of the liberation of the Auschwitz death camp, which revealed “the unprecedented cruelty,” of the Nazi Holocaust.
“On 27 January 1945, the gates of the Nazi concentration camp near the Polish city of Oswiecim, better known by its German name of Auschwitz, were opened and the few survivors freed,” the 82-year-old pontiff said.
Predictably, some Israeli commentators scored Netanyahu’s comments on Holocaust Remembrance Day.

Haaretz columnistÂ Gideon Levy wrote yesterday: “Israel’s bigwigs attacked at dawn on a wide front. The president in Germany, the prime minister with a giant entourage in Poland, the foreign minister in Hungary, his deputy in Slovakia, the culture minister in France, the information minister at the United Nations, and even the Likud party’s Druze Knesset member, Ayoob Kara, in Italy. They were all out there to make florid speeches about the Holocaust.”
Levy continued:

Yesterday was International Holocaust Remembrance Day, and an Israeli public relations drive like this hasn’t been seen for ages. The timing of the unusual effort — never have so many ministers deployed across the globe — is not coincidental: When the world is talking Goldstone, we talk Holocaust, as if out to blur the impression. When the world talks occupation, we’ll talk Iran as if we wanted them to forget.

It won’t help much. International Holocaust Remembrance Day has passed, the speeches will soon be forgotten, and the depressing everyday reality will remain. Israel will not come out looking good, even after the PR campaign.

In his videotaped message for the Polish commemoration of the 65th anniversary of the liberation of Auschwitz, Pres. Obama talked about the “sacred duty” to remember the “barbaric acts” that comprised the Holocaust, and he addressed the survivors who journeyed back to Auschwitz:

… to those of you who have come back today, I say, no, you are not “former prisoners.”Â  You are living memorials. Living memorials to the loved ones you left here. And to the spirit we must strive to uphold in our time—not simply to bear witness, but to bear a burden. The burden of seeing our common humanity; of resisting anti-Semitism and ignorance in all its forms; of refusing to become bystanders to evil, whenever and wherever it rears its ugly face.

Let that be the true meaning of Auschwitz.Â  Let that be the liberation we celebrate today — a liberation of the spirit that, if embraced, can lead us all — individuals and as nations — to be among the righteous.