On the flight home from their daughter Shoshana’s Bat Mitzva in Israel in 2009, Joey Fischman asked his wife, Sharon, what she wanted for her 50th birthday. Jewelry? A party?

Around the same time, Rabbi Avi Olitzky of Beth El Synagogue, where the Fischmans are members, was planning to sponsor a mission to the Abayudaya Jewish community in Uganda. It sounded like the perfect opportunity for the Golden Valley family — Joey, Sharon, 15-year-old Benji and 13-year-old Shoshi.

But an al Qaeda bombing in Kampala, Uganda’s capital city, scared some who were planning to take the trip. Financial concerns forced others to back out.

“One thing led to another and all of a sudden it was, we’re it. We were the only ones going,” Joey Fischman told the AJW. “But we were able to take the rough draft of doing the mission to the community and totally turn it on its head, and create the trip that we wanted.”

The Fischmans left on Dec. 16, and spent two days in Paris and Amsterdam before continuing on to Africa, where they met up with local Jewish travel agent Joanne Trangle, of Kuchanga Travel. Together with Trangle, the Fischmans saw wildlife and experienced tribal culture in Tanzania, and visited with the Abayudaya community in Uganda. They returned to the Twin Cities on Jan. 1.

“I’m still processing a lot of what we saw and experienced,” Joey said. 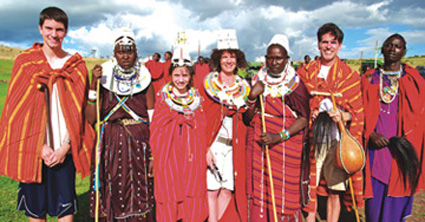 Their trip began in Mbale, Uganda, the largest city in the area, around which the Abayudaya community is scattered among several villages. The Fischmans stayed in the guesthouse in Nabugoye, which was considered “luxury accommodations,” according to Joey.

The Fischmans brought school and medical supplies, clothes and shoes, and even soccer balls — items donated by Beth El congregants — to the tiny Jewish community of about 1,000 people (who live among more than 10,000 Christians and Muslims). The community, which is only about 100 years old, is led by Rabbi Gershom Sizomu, who was ordained by the Jewish Theological Seminary.

“The year he spent studying in Jerusalem, his roommate was Rabbi Avi Olitzky of Beth El,” Joey said. “Because of that connection, I think that there’s a greater opportunity for the Minneapolis community, Beth El and the greater Twin Cities community to create an ongoing relationship of some sort.”

The Fischmans spent five days with the Abayudaya and visited the local hospital, which was funded by an American philanthropist, were present for the ritual slaughter of a goat, and even helped to bake a wedding cake for one of the couples in the village.

They also participated in Shabbat services in the local Moses Synagogue.

“They do have a mechitza (partition), but women are full participants in the service,” Joey said. “They had aliyot, they led services…which I found very interesting.”

“There’s 30 people there and it seems that they’re so much louder than us at Beth El,” she said. 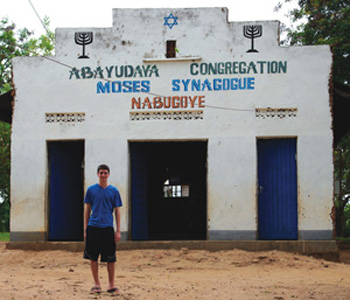 The Fischmans even attended a political rally for Rabbi Sizomu, who is running in the opposition party to become a member of Parliament.

“What absolutely stood out for me is two imams… and the reverend’s wife in the community stood up and spoke for him,” Joey said. “Living in the democracy we live in, to have three faiths stand up and endorse somebody like that to the wider community, yeah, it kind of happens, but not really… Hearing that and seeing that really gave me a lot of hope in some ways.”

The Fischmans also saw a lot of opportunity for industry to help the Abayudayan community. As an example, Joey talked to Rabbi Sizomu about a recycling plant for the thousands of plastic water bottles that litter the roadsides. But the community elders also manage a microfund that disburses business loans; according to Joey, small donations can be significant.

“They are really trying to work and find ways to move from being a self-sustaining, agrarian society, where they grow their own food, and, basically, that’s what they live off of with very low income. They’re trying to create jobs and more opportunities for the members of the community,” Joey said. “Anything that we can bring to them, whether it’s ideas, investments, our expertise in lots of different areas, to help them make that transition, it’s invaluable. They really want to advance and improve their lot.”

Benji would also like to develop a summer program for local Jewish teens who are interested in working in the Abayudayan villages they visited.

“I’m more thankful as I came back. It helped me realize how lucky we are to live in the United States,” he said. “I really want to organize some kids to go to the Jewish community and maybe go to other Jewish communities for seven weeks and go to a different one every week, and help out in whatever way we can.”

The Fischmans left the Abayudayan community and traveled to Tanzania where they spent time with the Hadzabe, Datoga, Iraqw and Masai tribes. They then visited the Ngorogoro Conservation Area and its crater, as well as the wildlife on the Serengeti.

“A big reason people didn’t want to go on this trip was fear,” Sharon said. “We’re here to tell you, there’s nothing to be scared of.”

For more of the Fischmans’ trip to Africa, visit their blog at: fischmansinafrica.blogspot.com.