Face to face with Israeli soldiers

In 2009, a group of Israel Defense Forces (IDF) soldiers visited Minneapolis as part of the Parallel Lives program, whichÂ connects them with Jewish youth in the Diaspora to strengthen Jewish identity, and solidarity and connection with Israel. Now, a year later, another group of soldiers — from the same paratroopers reconnaissance unit — visited Minneapolis to share their own unique stories and experiences.

The soldiers’ visit was sponsored by the Israel Program Center of the Minneapolis Jewish Federation in partnership with the Parallel Lives program. The soldiers, who were specially selected for the program, spent 12 days in Minnesota — April 15-26 — during which they visited synagogues, schools and service organizations; met with rabbis and leaders in the local community; and participated inÂ Yom Hazikaron (Israel Memorial Day) andÂ Yom Ha’atzmaut (Israel Independence Day) events, as well as the Night to Honor Israel.

“Through a connection with the army, any unit, you really connect with Israel,” said Noga Shavit, Minneapolis communityÂ shlicha (Israeli emissary). “[The soldiers] represent very different Israeli backgrounds, but they are the Israeli story.” 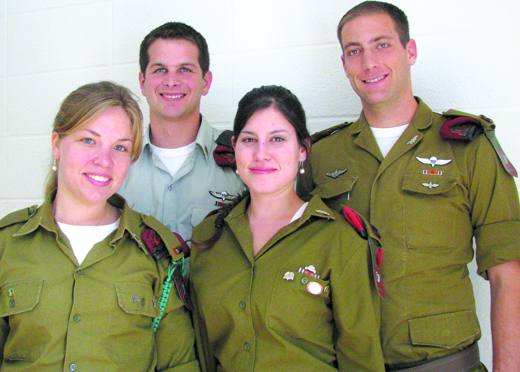 According to Shavit, the Israel Program Center is working to launch a full-scale, permanent partnership with the battalion, bringing back soldiers from the same unit each year.

“When they go back [to Israel], they will share,” Shavit said. “The impact is much, much more than this group.”

The most seasoned member of this year’s delegation was Captain Nadav, 27, the unit’s second-in-command.

(Editor: The surnames of the soldiers in this story are not being published at the request of the Israel Program Center, which cited security concerns.)

“We have a very strong impression about the community of Minneapolis,” Nadav said. “It’s a very strong Jewish community… I think you’re very lucky.”

Nadav was recruited for the IDF in 2001, and completed the officers’ course in 2003, after which he became a platoon officer. He served as second-in-command during the Second Lebanon War in 2006, where he led, among others, Staff Sergeant Michael Levin, an Israeli-American soldier from Philadelphia, who was killed in action.

Levin’s story was told in the 2007 documentaryÂ A Hero in Heaven, which was screened at last year’s Twin Cities Yom Hazikaron commemoration.

“I knew him and I was in the battle where he was killed,” said Nadav, who was wounded during the war, but made a full recovery and returned to active duty.

He commented that the young IDF soldiers form strong bonds of friendship, and “will die for each other in battle.”

Nadav said a defining moment for him during the war occurred when a soldier from Ethiopia was killed and the soldier’s commander, who had made aliya from Russia, went back for his body, despite heavy fire from Hezbollah fighters.

“There was no other way that those people would meet; at least they were meeting in the army and it made them do amazing things for each other,” Nadav remarked.

For Lieutenant Michal, 23, arresting a suspected female terrorist stands out as the most meaningful moment in her IDF career.

“We got intelligence about a woman in the Hamas organization who was going to explode herself,” she said.

Because of religious concerns, female soldiers are called upon to arrest Arab women. Michal went to the woman’s home and conducted a body check to make sure she was unarmed before taking her into custody.

“That was the time that I really felt that I was doing something meaningful for Israel and that I saved lives,” Michal said.

Second Lieutenant Miriam, 22, enlisted as an armor instructor in December 2007, just one month after a good friend had been killed while training in the armored corps. She says the officer training course was “one of the best things I did in life.”

She now serves as theÂ Paratroopers Reconnaissance Unit’s instructor officer. She said it’s important to remember that each soldier is also a unique individual.

“Soldiers are not only the soldiers that they see,” she explained. “They are people that have their own families, their own friends. They have lives beyond being soldiers.”

Miriam noted that little gestures from Jews around the world make a big impact on those serving in the IDF — even if it’s letters and packages from American kindergarten students.

“Living [in Minneapolis], you don’t see it, you don’t think that such a small thing would make a difference, but it does,” she said.

Lieutenant Haim, 23, enlisted in March 2006, and is team commander in the unit’s antitank company. He said his service has taught him important life lessons such as personal responsibility and leading by example.

“Everything you demand of [your team], you must first demand of yourself,” Haim said. “It’s an experience that will help me in my life after all.”

When speaking to adult groups in the Twin Cities, Haim stressed the importance of “The Spirit of the IDF,” the IDF’s ethical code.

“We talk about it, especially because of the different things going around the world about what the IDF is doing right and wrong,” Haim said. “We want people to know this document and the values in it, which every soldier knows and acts upon. For most people we meet, it’s surprising — they have no idea it exists.”

In Minneapolis, the soldiers most appreciated the warm hospitality they received from their host families and the greater Jewish community, and the community’s devotion to the Jewish state.

“I was surprised to see how much Israel is a part of daily life here and what a big effort is being done to have it that way,” Haim said. “For us, Israel is around us whether we want it or not.”

For Michal, she’ll return to Israel with the sense that she and her other soldiers are not alone.

“When we’re in Israel, sometimes you feel like the whole world is against you,” she said. “When you’re here, you know that a whole community is right behind you and really loves Israel and really believes in what you’re doing.”