Baseball fans in Minnesota likely have heard of Ron Shapiro. The Baltimore-based lawyer, negotiator and author is also a renowned sports agent. He has represented a number of Hall of Famers, and among his current clients is Minnesota sports icon Joe Mauer, catcher for the Minnesota Twins.

Shapiro, in a phone interview with the AJW this week, mentioned that he met Mauer’s parents in a Minneapolis soda fountain, when their son was still in high school. He became an “advisor” to the young ballplayer from St. Paul, and later negotiated his contracts with the Twins organization. Prior to the 2010 season, Mauer, who has won three American League batting titles, signed an eight-year contract extension for $184 million. 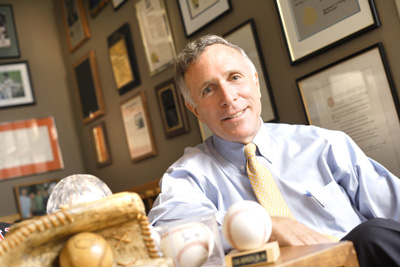 Shapiro will be the keynote speaker at the Twin Cities Cardozo Society Annual Dinner on Tuesday, Oct. 26 at the Marriott City Center in downtown Minneapolis. He said that his topic will be “From the Bar Library to the Ball Field: A Negotiator Emerges.”

The Cardozo Society is an affinity group for Jewish attorneys, judges and law students affiliated through the Minneapolis Jewish Federation and the United Jewish Fund and Council of St. Paul.

Shapiro, a founder of the prominent Baltimore law firm Shapiro Sher Guinot and Sandler, told the Jewish World that he holds the “unofficial record” for representing more Hall of Famers than any other sports agent. In that category, the 67-year-old negotiator has handled contract talks for Brooks Robinson, Jim Palmer, Cal Ripken, Jr., Eddie Murray, and another Minnesota baseball legend, Kirby Puckett. Shapiro’s clients also include two Hall of Fame broadcasters, John Miller and Chuck Thompson.

In response to my question, Shapiro allowed that he was disappointed to see the Twins quickly exit in the first round of this year’s AL playoffs. Although his son, Mark Shapiro, is general manager of the Cleveland Indians, the elder Shapiro notes that the Cleveland ball club was not in contention for a post-season spot; so he was a “Twins fan all the way through this season… I wanted the Twins to go all the way; because I think they have a terrific team, and I’m very attached to both the Twins and Minneapolis, after having come out there all these years.” (When Shapiro says “Minneapolis,” he likely means the Twin Cities.)

Shapiro has only visited the wondrous new Target Field once; he mentions that he’s busy with professional demands — including the Shapiro Negotiations Institute, which works with professional basketball and football franchises — and he has a blended family of seven children and 10 grandchildren, with his wife. So, he doesn’t get to as many ball games as he would like to attend.

In addition to numerous philanthropic engagements, both in the Jewish and the greater community, Shapiro has authored several books, including the 2008 best-seller Dare to Prepare: How To Win Before You Begin! (Crown Business), The Power of Nice: How to Negotiate So Everyone Wins — Especially You! (with Mark Jankowski), and Bullies, Tyrants and Impossible People: How to Beat Them Without Joining Them.

Shapiro remarks, in the context of his Jewish communal involvements, that he wrote about the Camp David accords in one of his books. “I was shuttling to the White House with other Jewish community leaders — I was the youngest one — way back in the ’70s, when we were talking with [President Jimmy] Carter about Jewish American perspectives on it,” he recalls. “I went to the dinner that celebrated that peace, along with Sadat, Begin, the president and about 500 other people.”

Regarding his return to Minnesota next week, Shapiro mentions his friendships with Tonya Puckett; Joel and Sharon Waller (he was the former chairman of Wilsons Leather); and friends with the University of Minnesota Foundation.

“Through the years I’ve come to know and enjoy Minnesota,” Shapiro comments.