VOICE: Community Building Initiative, a collaboration with the Sabes JCC, Jewish Community Action and the Minneapolis Jewish Federation, will host a free Russian Cultural Celebration from 11 a.m. to 1 p.m. on Sunday, March 13 at the Sabes JCC. The rich culture and history of Russia will be celebrated with a fashion show, music, prizes and activities for the whole family.

“I don’t think anything like this was done before in the Jewish community,” Lyudmyla Petrenko, VOICE’s community organizer, told the AJW. “Specifically, something that reminds [Russian Jews] of their homeland or something that they can reconnect to how they lived before.”

VOICE has partnered with the Twin Cities’ Russian Cultural Center, “Russian Soul,” a nonprofit organization dedicated to preserving and promoting Russian folk culture and art based in Minnesota. Members of Russian Soul will present a historically accurate program of 19th-century fashion from all parts of Russia.

The celebration will also include a performance from Diversity Dancers, a group of elderly Russian women who meet weekly to dance and make their own costumes, and are particularly interested in Russian-Jewish culture.

“It came together very well because so many people were interested in it,” Petrenko said.

The family-friendly event will also include a variety of “stations,” where attendees can learn about different aspects of Russian culture — including jewelry, dance, folk music, the Cyrillic alphabet, crafts and games. Those who visit each of the stations will be entered into a drawing for a variety of prizes.

Petrenko said it’s also an opportunity for people to learn about their Russian ancestors as well as the different traditions that emerged from each region of Russia.

“Not everybody knows what life was like back in Russia for those people — how it looked, what games they played, what crafts they made,” Petrenko said. “Jews were part of the Russian culture at that time, and it’s still dear to their heart. They still remember the songs, they still remember those traditions.”

Following the Russian Cultural Celebration, at 2 p.m., Temple Israel will host Lisa C. Paul, author of Swimming in the Daylight: An American Student, a Soviet-Jewish Dissident and the Gift of Hope (Skyhorse Publishing).

The event is co-sponsored by the Jay Phillips Center for Interfaith Learning, Jewish Community Relations Council of Minnesota and the Dakotas, Jewish Family and Children’s Service of Minneapolis, Jewish Historical Society of the Upper Midwest, Minneapolis Jewish Federation, VOICE and the Sabes JCC. 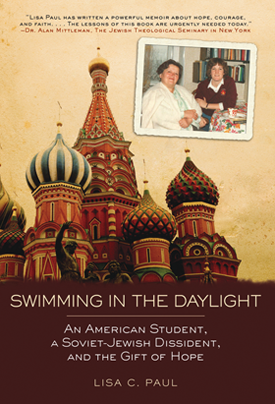 Lisa C. Paul, author of Swimming in the Daylight: An American Student, a Soviet-Jewish Dissident and the Gift of Hope, will discuss her book at Temple Israel.

The book chronicles the friendship between Paul, a Catholic student from the University of Minnesota living in Moscow in the early 1980s, and her Russian language tutor, Inna Kitrosskaya Meiman, a Soviet-Jewish dissident and refusenik who was repeatedly denied a visa to receive life-saving cancer treatment abroad. Paul lobbied members of Congress and other U.S. officials to bring Meiman to the United States, eventually embarking on a 25-day hunger strike — ingesting only fruit juice and vitamins — to shed light on the struggle of Soviet Jews.

“I realized that I needed to take some sort of dramatic action to call attention to me so that I could call attention to her plight,” Paul told the AJW in a recent phone interview. “For me, it was an exercise of trying to live my faith, which was really one of compassion and love, and really believing in that type of message: You can make a difference and what you have to offer is enough.”

Paul said her hunger strike helped to renew energy in the Soviet Jewry movement and involved new politicians. In Minnesota, she received strong support from former Sens. Rudy Boschwitz and David Durenberger, and U.S. Rep. Gerry Sikorski, who wrote a letter to Mikail Gorbachev, who at the time was general secretary of the Communist Party of the Soviet Union.

Paul also got involved in the local movement and worked with the Minnesota/Dakotas Action Committee for Soviet Jewry chaired by Stephen Feinstein.

“To do something and fail was more acceptable than to do nothing at all,” Paul said. “In the letter I wrote to Inna about the hunger strike, I told her, ‘The rest of my life won’t make sense if I don’t stop and try to do something to help you.’”

Paul’s hunger strike ended with a press conference at the U.S. Capitol on Jan. 7, 1986. She went on to work for the landmark Chautauqua/Eisenhower Institute conference on U.S.-Soviet relations, and then for the American Committee on U.S.-Soviet Relations.

In 1987, Meiman was finally permitted to emigrate to the United States, where she received aggressive cancer treatment at Georgetown University Hospital in Washington, D.C. She died a few weeks later.

Following Meiman’s death, Paul, who was only 24 years old, felt it was too painful and too personal to continue working on U.S.-Soviet relations. She went to law school at Marquette University in Milwaukee, and now works to empower those affected by employment discrimination and personal injury.

She said her book is meant to inspire people to overcome their fears.

“My friendship with Inna is a snapshot of this historical time right before the fall of the Soviet Union,” Paul said. “The book is dedicated, in part, to the Soviet Jews and dissidents of the 1970s and ’80s, and for all those who fought for their freedom. In a way, that’s the most important role I see for myself, as a conduit of that tribute.”

And in an effort to expand that tribute, Paul will present the first Inna Meiman Human Rights Award during remarks at noon on Thursday, March 10 at the University of Minnesota. The award, which will recognize University of Minnesota students who have made significant personal contributions in the promotion and protection of human rights, is sponsored by the university’s Human Rights Program and the Center for Holocaust and Genocide Studies, the latter of which was founded by Stephen Feinstein.

In a YouTube video promoting her book, Paul talks about her goal for wanting to share her story.

“My greatest ambition,” she says, “is that this story will inspire others to stand up and fight for the causes in which they believe, that it will help people find daylight in their lives even during the times of the darkest despair, and to realize that it is the courage inside, not the chaos outside, that defines us.”

How to learn to stop worrying and love the Iranian bomb