Debbie Waterous, of Minnetonka, celebrates the Festival of Lights with her unique collection of menoras and dreidels

Waterous has amassed a collection of about 25 to 30 menoras, as well as more than 50 dreidels, that she displays each year to celebrate the holiday.

“I just always wanted to collect something,” Waterous told the AJW. “I started seeing all these really different, cool, bright, colorful menoras and I thought it would be kind of fun to collect. So you start with one and all of a sudden you’re getting another and another and another. And it just turned into a collection.”

The same goes for her dreidels, which Waterous found could be collected in different colors, sizes and shapes. 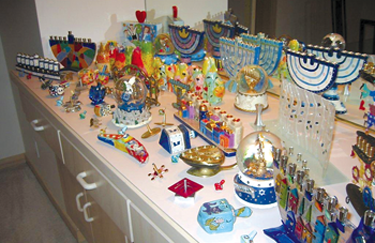 Debbie Waterous sets up her menora and dreidel collection shortly after Thanksgiving each year. (Photo: Courtesy of Debbie Waterous)

The ongoing collection has become a tradition in her family, which started when her daughter Paige was in kindergarten. Waterous sets up the collection shortly after Thanksgiving, and it’s something her daughter, now 20, and her friends look forward to each year.

“I like taking them all out and seeing them again,” Waterous said of her collectibles.

Waterous said she has gotten pickier about the types of dreidels and menoras she adds to her collection. She prefers items that are bright, elegant or whimsical — such as a menora snowglobe with dogs and cats wearing yarmulkes — and purchases about one to two new pieces each season.

“I don’t just buy to buy,” said Waterous, who purchased a menora at the end of last season that featured animals on Noah’s ark.

Among her favorite items are two menoras that she described as “elegant art pieces” as well as a clay menora her daughter made in kindergarten, which is always displayed in front.

“It just makes the holiday, to me, more festive,” Waterous said. “And they’re pretty. I just like to look at them.”