A few weeks ago my mom called to say that she missed me during our annual family celebration. The celebration wasn’t for a birthday or an official holiday — my parents were celebrating the 20-year anniversary of our family’s aliya to Israel.

Two decades ago my parents packed our bags and took three young children from our home in central Russia to begin a new life in Israel. We weren’t the only family leaving Russia at that time — the Russian aliya is the largest ever: nearly one million people. Its consequences are still felt and analyzed in Israel to this day.

There are many interesting aspects to the Russian aliya that I could discuss. There is the fact that 30 percent of Russians who made aliya weren’t Jewish according to Halacha. I could talk about the reason most Russians went to Israel — not because they were Zionists, but because they were afraid of what would happen to them if they stayed in Russia. I also could talk about the impact on Israel: the influence of Russian culture, the problems created by a lack of suitable jobs, or the tensions created when the new immigrants opened nonkosher stores.

Instead of all this, I would like to tell you my personal story. It is about a Russian family that moved to Israel in 1990, and didn’t leave a grandma or an uncle in Russia — really, it’s the story of an Israeli family. 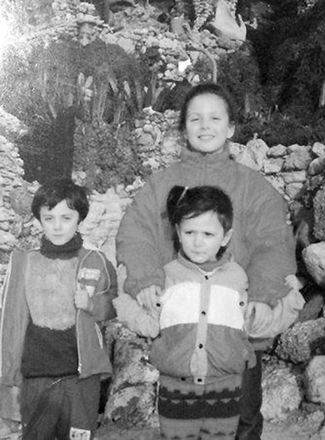 Shlicha Alisa Warshavsky (front) is pictured with her brother Anton and older sister Helena in Herzliya in 1990, the year the family made aliya. (Photo: Courtesy of Alisa Warshavsky)

My first memory of Israel is dozens of people coming to our small apartment in Tel Aviv, where my brother, sister and I slept in the living room because we only had one bedroom.

These visitors were allÂ olim hadashim, new immigrants, and they came to our apartment for one purpose: to learn Hebrew from my mom. Now my mom wasn’t a Hebrew teacher; she didn’t really know the language that well herself. She was just a smart young woman who started teaching herself Hebrew a few months before we moved to Israel.

Like my parents, those young adults who used to come to my mom’s classes were bright, hopeful people who just wanted to become part of Israeli society, work in their professions, raise their families and live a happy life.

While they were studying at home, my brother and sister and I went to school, where we learned Hebrew ourselves and became friends with the rest of the kids in class.

I was a regular Israeli child, but there was not a year in my life that someone around me didn’t remind me where I came from. Sometimes it was other kids teasing me, or sometimes it was impressions of Russians speaking Hebrew on television. I was even embarrassed that my parents had Russian accents! There was always something to remind me that the path was long for Russians to become a natural part of society.

I know that my family’s story is more successful than many others. My parents chose to live in a Tel Aviv neighborhood where Russian was not the main language, while many of their counterparts chose Russian neighborhoods and schools. My dad and his friends started a business that is successful, while my uncle, who is an expert in physics, works to this day as a maintenance person.

Indeed, every Russian family in Israel has a different story, but there also is no doubt that the Russian immigration changed Israeli society. The Russians made an amazing impact on education, science, culture and sports. Today there is a popular Russian theater in Israel, and one of the most successful supermarket chains, the nonkosher Tiv Taam, first opened to serve the Russian population.

The Jewish Agency for Israel (which is also the organization that sent me to Minnesota) is dedicating 2011 to “20 years of aliya from the former Soviet Union.” When I first heard that, all I could think was, “That’s me, I am a proud ola to Israel.”

I am grateful that I was born in Russia. I think my family’s experience makes me better able to understand what it means to leave everything you know and move far away for freedom. I smile when my friends say that I am the biggest Zionist in Israel because I know that 60 years ago my grandma and grandpa couldn’t even dream of the day when we would all live in a safe place, in a Jewish state.

Alisa Warshavsky is the Israel emissary on behalf of the United Jewish Fund and Council of St. Paul. She is here to build connections between Israel and our local community.

For information on upcoming Israel-related events, contact Warshavsky at 651-353-2670 or: alisa@stpauljcc.org. She also writes a blog called Israel hotDISH, which can be found online at: www.jewishstpaul.org (click on the link under “Updates”).

Practicing medicine and creating art for a ‘kinder world’