Jacob Zelonky took time to visit seniors at Sholom Community Alliance’s Knollwood Place and Sholom Home West on Monday, his only day off — the 12-year-old actor has a busy schedule.

Jacob is in town through the weekend playing the role of Michael, Billy’s best friend, in the touring company ofÂ Billy Elliot. The show, which won 10 Tony Awards in 2009, including Best Musical, is running through Jan. 9 at the Orpheum Theatre in downtown Minneapolis.

Jacob, a native of Memphis, Tenn., has been touring with the show since October; he opened in Durham, N.C., on Oct. 30. From there he went to Cleveland, before settling in Minneapolis. Following his stint here, the tour heads to Charlotte, N.C., and Toronto, Ontario, Canada.

In each city he visits, Jacob visits seniors as part of his Bar Mitzva project.

“I’m singing some songs for them and they’ll ask me questions,” Jacob told the AJW prior to his Sholom visit. “Afterwards, I’ll meet them and talk to them and I’ll give them hugs.”

It’s a tradition he started in Memphis, when he visited a senior living home with his friends.

“I would sing for them with my friends and it was just really fun,” Jacob said. 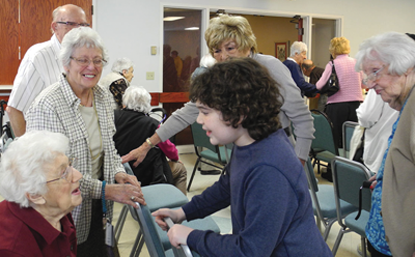 In St. Louis Park on Monday, Jacob appeared with his father, actor and director Robb Zelonky. Jacob’s voice was a little under the weather, so his father took the lead in singing Yiddish songs. The Zelonkys played to a standing-room-only crowd at Sholom Home West.

“He went and spoke to the audiences in both facilities,” said Connie Sandler, director of public relations and marketing at Sholom Community Alliance, “and, of course, hugged everyone.”

In addition to visiting seniors, Jacob continues to study for his Bar Mitzva — though his preparation had to be altered for his touring schedule.

“My mom and my sister have been helping me learn Hebrew. They’ve been helping me study,” Jacob said. “My cantor is sending me MP3 files on the computer, so that way I can learn what I need to learn while being on tour.”

Jacob’s Bar Mitzva is tentatively set for Nov. 19, though it’s subject to change based on his participation in the show.

“That’s the date he has on the books, but it will be around that time,” said Jacob’s mother, Barb Gelb. “We’re not 100 percent sure now, because a lot of it depends, of course, on the tour. It might happen on a Monday now instead of a Saturday.”

Jacob’s schoolwork has also been altered for his touring schedule. Tutors work with the 20 kids that are part of the show, who are all learning different things. Jacob, who is in the sixth grade, travels with the books from his school in Memphis and studies at least 15 hours per week.

Jacob first became interested in theater because of his father and first appeared in a play with his dad at the age of three.

“Ever since then, I’ve been acting all my life,” Jacob said. “I just love doing theater.” 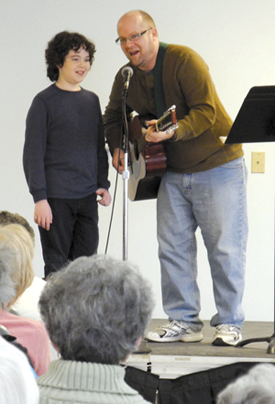 Jacob Zelonky is pictured with his father, Robb Zelonky, who performed Yiddish songs.

After being seen performing in Memphis, he was asked to audition forÂ Billy Elliot, a play about a boy who learns to tap-dance. The only problem? He didn’t know how to tap.

“We bought his tap shoes literally the week he had his first audition,” Gelb said. “He really didn’t know anything about tap-dancing.”

Fortunately for Jacob, the character of Michael isn’t a dancer like Billy Elliot, though he does tap-dance in the number titled “Express Yourself.”

“I learned how to tap dance a little bit and went back for more and more auditions, and every time they just told me to keep learning how to tap,” Jacob said. “Eventually, I got a call saying that I got the part and I just needed to learn how to tap. I started taking some dancing lessons and now I know how.”

Jacob said the best part about his character is Michael’s humor.

“My favorite part about playing this role is probably that I have a lot of funny lines that get a lot of laughs,” Jacob said.

Jacob has a six-month contract with the show, though his participation is dependent upon the physical changes that will inevitably take place. Like all the kids in the show, if his voice changes or he grows too tall for the part, he’ll have to relinquish the role to another actor.

Even if that happens, this won’t be the last we’ll see of Jacob Zelonky. He said he “definitely” sees acting as a long-term career choice.

“I really love being in theater,” Jacob said. “I think it’s really fun.”

Billy Elliot is running through Jan. 9 at the Orpheum Theatre, 910 Hennepin Ave., Minneapolis. For tickets and information, call 800-982-2787 or visit: www.hennepintheatretrust.org.