When was the last time you were at the Basilica of St. Mary in Minneapolis? Was it for a wedding? Did you go to the annual rock ’n roll block party fundraiser? Did you ever think of going there to see a show of Jewish art? I never thought I would, but I’m glad I did.

Tikun:Repair is an exhibit of works by the Jewish Women’s Artists’ Circle. Eighteen unique pieces of art, each interpreting an aspect of the Jewish concept of tikkun olam (repairing the world), is housed in the Basilica undercroft (sort of a glorified basement; but I don’t expect Catholics to understand that bima is basically a platform).

These highly contemporary and profoundly Jewish artworks displayed in close proximity to traditional Catholic statuary of saints and angels make viewing this exhibition even more intellectually and artistically stimulating. Those who saw this exhibit at Adath Jeshurun Congregation earlier this year would do well to see it again in its new space.

Many of the pieces are displayed in a rotunda built specifically as a gallery when parts of the Basilica were remodeled several years ago. The lighting shows off the artworks to their best advantage, regardless of the medium. All of the media deliver different interpretations of the similar messages about the origins of the concept of tikkun olam and how it is conducted in the world.

According to Gloria Cooper, whose “Rainbow Reconstructed” watercolor is included in the exhibition, tikkun olam is the third artistic theme adapted for study and interpretation by the Jewish Women’s Artists’ Circle. 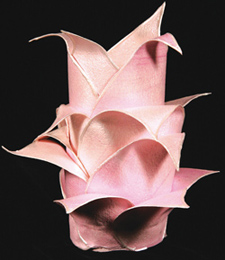 The group was founded four years ago by Lucy Rose Fischer — represented in the show by her reverse glass painted bowl “A Place in the Sun” — who wanted to create a community of Jewish women artists. Over the years it has grown from 10 to 18 members, whose works must pass a jury before the artist is invited into the group. They meet monthly to explore one Jewish theme annually, climaxing in an exhibition of works that reflect that year’s theme.

Just as wise Jews have been discussing these themes for centuries, the show demonstrates the wide variety of artistic interpretations of the tikkun olam theme.

Sharon Stillman’s “Lotus Tzedakah Box” is a three-dimensional work of acrylic paint on a gel medium. Inspired by the artist’s meeting with the Dalai Lama, this lotus-like piece reminded me of a crown. Just so, it is appropriate, sinceÂ tzedaka is one of the crowning jewels of all the mitzvot.

A different jewel is “HaMakom” by Jane Bassuk. Her picture-sized quilt with embroidery and beads representing a tree and landscape exudes the warmth and light that are reflected in the harmony of a future world that has become whole. 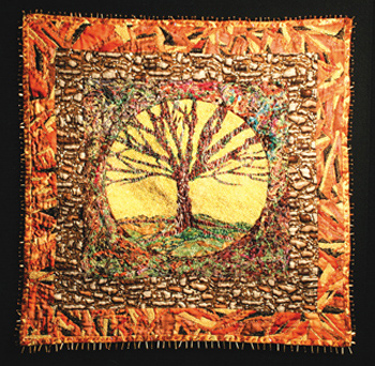 Creating a new whole out of disparate or broken pieces is central to the concept of tikkun olam, and those working in three dimensions made the most of this idea. Aimee Orkin’s “Shattering of the Vessel” expresses the chaos of a broken world, and Sandy Baron’s “The Recycled Bag Lady” creates a delicate diorama from found and used objects.

And Joyce Lyon’s “These comings and goings are almost too much” assembles pieces of greeting cards and handwritten notes to and from people who helped each other through difficult times into a comprehensive accordion-book that demonstrates the caring of those helping to repair the world one person at a time.

Gallery visitors have Circle artist Sandra Brick to thank for getting the show into the prime space at the Basilica. Her tallit art “Refuah Shlemah” is included in this exhibition, but she had shown at the Basilica before with a one-woman show of a dozen artistic tallitot and was familiar with the demanding application process there.

Enjoy an afternoon by visiting the Walker Sculpture Garden before it snows and stop in to the Basilica to warm up while enjoying some wonderful Jewish art.