In the long term, the fire could test the Jewish Agency’s plan that places more emphasis on creating volunteer opportunities in Israel

NEW YORK (JTA) — With Israel in desperate need of aid to fight the fire ravaging its north last week, countries from four continents sent help, including those with whom Israel has been at odds lately, such as Turkey.

Now that the fire is out, the question is what will Israel’s close friends, the American Jewish community, do to aid in the recovery process?

Damage estimates are ranging as high as $75 million, and the American Jewish community has opened fundraising mailboxes, started as emergency campaigns while the blaze was still burning.

The national branches of the three largest U.S. Jewish religious denominations launched fire assistance funds and asked their rabbis to address the topic in their sermons last Shabbat. Dozens of the country’s largest organizations, including the Jewish federation system, the American Jewish Committee and B’nai B’rith International, also started funds.

The heaviest lifting in the nonprofit world likely will be done by the Jewish National Fund, which since Israel’s founding has been responsible for the forestation of the country. 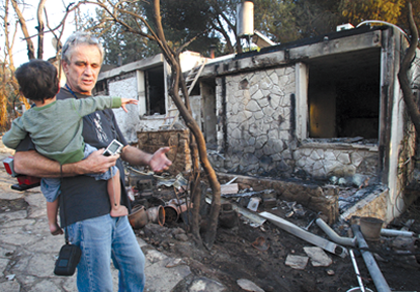 A father and his son look at the remains of their house in Ein Hod, near Haifa, on Sunday. About 250 houses burned down in the Carmel Forest fire. (Photo: Meir Partush/Flash90/JTA)

With some 12,000 acres scorched and an estimated 5 million trees burned, the JNF has launched a $10 million campaign to be split between reforestation and other causes, such as rebuilding tourism in the area. In less than a week, JNF had raised nearly $2 million in cash and pledges. A number of organizations, such as Hadassah, have pledged to help JNF pay for more trees.

Reforesting the area will be a slow process, according to the JNF’s director of forestry for the northern region, Omri Bonneh. For the first year, JNF says it won’t plant any trees, allowing the land to replenish itself.

It’s not clear how much the American Jewish organizations’ total campaign will be; in some cases it’s not yet clear where the money will go.

The American Jewish Committee pledged $100,000 for reforestation, saying it will plant 10,000 trees to commemorate the 42 people — mostly police cadets from the Israeli Prisons Service — killed in the wildfire.

B’nai B’rith International, which by Tuesday had collected $12,000, will use the money to address unmet needs, according to its vice president of programming, Rhonda Love.

Last week, Magen David Adom, Israel’s version of the Red Cross, deployed hundreds of medics, paramedics, emergency vehicles and volunteers to the scene of the fire. It’s American fundraising arm,Â the American Friends of the Magen David Adom, had raised about $150,000 online since the fire broke out, according to its director of marketing, Robert Kern.

A number of organizations are focusing on helping Yemin Orde, a youth village for immigrants to Israel that was 40 percent destroyed in the fire.

Hadassah is providing space for 500 families dislocated by the fire by opening several youth villages with which it is associated. The Jewish Agency for Israel has made space in its facilities for Yemin Orde to continue operating.

The two overseas arms of the North American federation system have been on the ground since the fire began. The American Jewish Joint Distribution Committee helped out in the evacuation of residents and supplied emergency needs such as food and blankets. Now the JDC is planning to provide programs for the disabled, psychosocial support and emergency preparedness, according to spokesman Michael Geller.

The Jewish Agency brought hundreds of children from the stricken area to Tel Aviv for respite, and planned to bring 4,000 by the end of Hanuka.

JDC and the Jewish Agency also are working on coordinating youth volunteers. In the long term, the fire could provide the Jewish Agency with an opportunity to test the value of a new strategic plan that places more emphasis on creating volunteer opportunities in Israel.

The agency has proposed a plan to focus volunteer mentors on the Druze town of Tirat HaCarmel, a development town near Haifa that was evacuated during the fire. Agency officials also have talked to the Jewish Federations of North America about creating through the agency’s MASA program a project to bring Diaspora Jews to help in rehabilitating the animal wildlife in Israel’s north, according to Jewish Agency director general Alan Hoffmann.

Agency officials also said they would like to set up a fund for grants to victims of the fire, much like the fund it has for victims of terror that gives out up to $35,000 to individuals and families affected by terrorism.

How much exactly the JDC and Jewish Agency will be able to do in the long run will be determined largely by how much the federations are able to raise for them. That’s not yet clear, though insiders said the federations would probably allocate approximately $2 million.

Their campaign received an early boost when the JUF-Jewish Federation of Greater Chicago immediately pledged $500,000 of its own money for the JDC and Jewish Agency’s fire relief efforts.

The question now is whether money will continue to come in now that the fire has been extinguished.

“It is clear that when the fires stop burning, also the flames of philanthropy tend to die down,” Hoffman said. “But there are clear needs that have been created here. The question is how can world Jewry play a part in restoring this place to where it was before, and that will require resources.”

Locally, the Minneapolis Jewish Federation and United Jewish Fund and Council of St. Paul (UJFC) have called on members of the Twin Cities Jewish community to help the victims of the fire and their families.

In Minneapolis, those wishing to contribute financial support can visit: jewishminneapolis.org; contact Mort Naiman at: mnaiman@mplsfed.org or 952-417-2322; or mail checks to the Minneapolis Jewish Federation, 13100 Wayzata Blvd., Suite 200, Minnetonka, MN 55305.

Elsewhere, a variety of emergency campaigns have been established in the wake of Israel’s devastating forest fire:

International Fellowship of Christians and Jews

Organizations of the Conservative/Masorti movement in North America

Union for Reform Judaism and ARZA

Zaka, a recovery and identification organization