A Shoah survivor who spoke out

Henry Oertelt survived the nightmare of the Shoah, and then wrote and spoke widely about the depths of human evil

Holocaust survivor Henry Oertelt spoke often about his experiences. As a 15-year member of the speakers bureau of the Jewish Community Relations Council of Minnesota and the Dakotas (JCRC), Oertelt gave “scores of speeches,” said executive director Steve Hunegs.

“He did not want people to feel sorry for him; he wanted people to appreciate the fact that he had the opportunity to make a new life in the United States,” Hunegs told the AJW. “But he wanted to teach people the lessons of the Shoah, so that no one again would suffer as he did.”

A native of Berlin, Germany, Oertelt was 22 years old in 1943, when the Nazis took him away. He and his brother, Kurt Messerschmidt, performed at Theresienstadt, and Oertelt endured time at the notorious Auschwitz-Birkenau death camp, where he lost his mother. He was on a death march when he was finally liberated by U.S. troops on April 23, 1945 — weighing only 82 pounds.

“Henry demonstrated that as a result of his experience as a survivor of the most inhumane treatment ever inflicted by one onto another, he became more sensitive, more willing to embrace human differences, more attuned to others, and more attentive to the responsibility of telling his own story so as to ensure that such evil would never be repeated again,” Allen said. 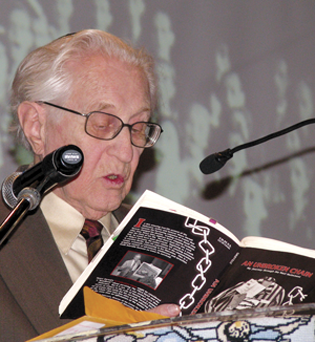 Shoah survivor Henry Oertelt reads from his book, An Unbroken Chain: My Journey through the Nazi Holocaust, at the Twin Cities Yom HaShoah commemoration in 2008 at Temple of Aaron. (Photo: Mordecai Specktor)

To make certain his story was told, Oertelt penned An Unbroken Chain: My Journey through the Nazi Holocaust. Allen announced that beginning this year, every Bar and Bat Mitzva student at Beth Jacob Congregation will receive a copy of the book, “providing a chain of tradition that will link his life to theirs.”

In 2009, the Star Tribune reported that the film rights to the book were sold to an independent film company that has plans to turn it into a feature film. Oertelt’s granddaughter, Corey Samuels, is serving as associate producer.

Oertelt’s experience was also documented by Steven Spielberg’s Shoah Foundation Institute, which is part of the University of Southern California.

“He seemed to emerge from the Shoah, from the depths of despair, with the belief of grabbing on to life,” Rabbi Allen told the AJW. “And he lived it with gusto and a certain type of joy.”

When Oertelt, his wife, Inge, and their young daughter Stephie arrived in St. Paul in 1949, Oertelt found employment at area woodworking shops. He later sold furniture at Cardozo’s before becoming a successful insurance salesman.

He was a board member of Beth Jacob Congregation since its inception in 1985, served on the building committee, and was involved in liturgical roles, chanting “Kol Nidre” and “El Male Rachamim,” in memory of all Holocaust survivors, during the times Yizkor was recited. Oertelt also chanted the “El Male Rachamim” at the JCRC’s annual community-wide Yom HaShoah commemoration.

Oertelt earned three honorary doctorates and numerous other honors, but took greatest pride in the family and life he had built in the United States.

“The amazing legacy of Henry was that he was a Holocaust survivor who became part of building a new Jewish community,” Allen said. “For someone who witnessed Kristallnacht and saw so many synagogues torched in Berlin in 1938, 50 years later in 1988, he was part of a community that built a new synagogue and went from destruction to thriving vitality.”

Oertelt is survived by his wife; son, David, of Bloomington; brother, Kurt Messerschmidt, Portland, Maine; four grandchildren; and three great-grandchildren. He was preceded in death by daughter, Stephanie Samuels.