A new leader at Torah Academy

Rabbi Yaakov Rabinowitz comes to St. Louis Park, after a successful career in Jewish education north of the border

Rabbi Yaakov Rabinowitz, the new dean of Torah Academy in St. Louis Park, says that his initial challenge has been to acclimate himself to “the culture of the city and the school, to try to get to know the students, parents, the teachers.”

He is trying to uphold “the motto or the mantra” of the school: “We strive for excellence in both Judaic and general studies,” he says. And the school also stressesÂ menschlichkeit — “good character traits,” as Rabbi Rabinowitz puts it — which is entwined with all aspects of Torah Academy lessons and activities.

The Torah Academy dean, a native of Brooklyn, comes to the Twin Cities after a 20-year career as a teacher and principal in Toronto, Canada. He mentions that he taught in the Eitz Chaim schools; in 2005, he became the principal of Yeshiva Nachlas Zvi, a high school for boys.

“When my mother heard that I was going to be a principal,” Rabinowitz recalls in a humorous vein, “she knew that I would be a successful one, because I was always in the principal’s office.”

The school on Joppa Avenue, originally founded in 1946, has 240 students, and serves students from Torah Tots (three years old) through eighth grade. Torah Academy’s student population comes mainly from Orthodox families; but Rabinowitz stresses that “all children are welcome here,” and 15 to 20 percent are not affiliated with an Orthodox synagogue or any synagogue. 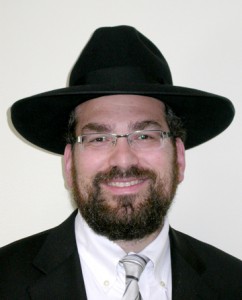 The school day begins with davening. “We take our Judaic and general studies very seriously,” the rabbi says, and defers a question to Ginger Vance, Torah Academy’s general studies principal, who is sitting in on the interview with the Jewish World.

Vance notes that the students’ standardized test scores have risen sharply over her five years at the school — from about the 40th percentile to the 80th percentile, “and we continue to climb,” she adds.

Returning to the new dean’s adaptation to a Jewish community that is smaller than the one he grew to know in Toronto, he is quick to add, “it’s a very nice community… a very pleasant place to live.”

Rabinowitz was hired in May, and began his job in August.

“Did I mention the dogs?” the rabbi asks. “I think I’m the only guy without a dog in this city.”

In Toronto, Rabinowitz also was the co-founding director of Chanoch Lenaar, a volunteer organization serving the needs of educators, parents and students. The group brought in many prominent lecturers.

The Torah Academy dean completed the Torah Umesorah National Principals Fellowship, an intensive two-year program that focuses on varied elements of instructional leadership in Jewish schools, and received his principal’s license. He said that he is close to completing a master’s degree in educational administration through Touro College.

Writing in the November issue of Kolenu, the Torah Academy newsletter, Rabinonwitz explained, regarding his educational philosophy, that “the foundation of a successful education issimchas hachaim [joy of life]. When students are happy in school, their potentials and performances soar. When working with students, I personalize my approach and cater to each one as much as possible, keeping the individual’s best interest at the forefront.”

As Torah Academy dean, Rabbi Rabinowitz follows Rabbi Binyomin Ginsberg, who was at the school for 11 years.

Rabinowitz met his wife, Miriam, at a friend’s wedding in 1989. They have seven children, ranging in age from one and a half to 20; three of them attend Torah Academy.

In answer to a question about navigating the ship of the school through the recession, the rabbi allows that Torah Academy is “struggling,” like every other nonprofit institution in the Jewish community. However, successful fundraising has allowed the school to keep running and serving the community.

“We never turn any child away,” says Rabinowitz.